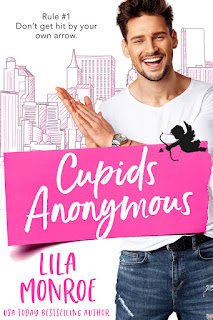 Lila Monroe starts off her new Cupids series with lighthearted romance with a touch of Cyrano de Bergerac inspiration to it in Cupids Anonymous. Poppy Hathaway has a way with words, especially when it comes to romantic prose. For anyone that may need that note that will convince someone to go out with you, a letter professing your undying love for that significant other, a spiel that begs forgiveness from that person whose heart you may have broken, or even a quick sext to let someone know you're thinking the nicest of naughty thoughts, Poppy's your go-to person. She's even got a good list of loyal return customers, but the one who takes the cake is none other than Dylan Calloway. The hotelier undeniably has the whole charm and flirt thing down pat, but he also happens to be Poppy's top frequent flier, erm, client. His latest task for her, however, is different from his usual--Dylan needs Poppy to help him convince his high school crush--the girl he's convinced is "the one"--that they're meant to be together. With the Catskills as the backdrop during the summer, Poppy's ready to help, but when Poppy's ex and an ill-timed attraction to Dylan pop up, this could turn out to be a not-so-happily-ever-after for her.

I can't believe it's been a couple of years since I last read something penned by Lila Monroe, but I'm glad that I was able to re-discover her fabulous rom-com ways via a series starter! I adored Poppy and her by a wordsmith-styled Cupid. Here was someone who still believed in love and romance even though she's had her heart broken by someone she thought she had a future with. Dylan initially came off as a guy who was fancy-free when it came to commitment, and then he had the harebrained idea of pursuing a girl he crushed on back in high school. Hey, his expertise was in the ways of hotels, not the heart, so I get why he needed Poppy's help. I loved these two together because they had banter and unlikely sort of connection but a connection nonetheless--the kind that could spark the sort of love story that you could tell with generations to come in the family you end up creating together. I wouldn't necessarily say there were any real villains in the story--nope, not even Poppy's ex, although I'd never really consider Tyler a favorite of mine--and that turned out to be a refreshing change. Overall, Cupids Anonymous was the sort of romantic comedy read that I could snuggle up with during a sudden rainstorm. I'm giving 4.5 stars. ♥