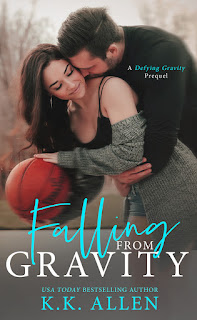 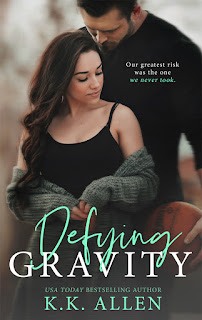 Note: An advanced reader copy (ARC) of the novel, Defying Gravity, was provided by the author via Give Me Books Promotions. The novella, Falling from Gravity, is a personally owned copy.

From the moment I read K.K. Allen's contribution to the Spring Fling anthology a few months ago, I knew I needed more from Amelia Clark and Tobias James's story. While Falling from Gravity, which is now available as a separate novella since the original anthology it was part was a limited release, was indeed about Amie and Toby's romance over spring break, the author's newest full-length novel, Defying Gravity, is their love story--the one where we go from a happy-for-now ending in the original short story to a more satisfying and swoon-worthy happily-ever-after.

With Falling from Gravity, Amie and Toby have known each other for years, what with her being his sister's best friend. In a week's time, however, everything changes between them while they're away at Big Sur. I decided to re-read this novella even though I'd already read it as part of the Spring Fling anthology because I wanted to see if I'd feel the same way, and yep, I most certainly did! I adored Amie and Toby's story, and the ending was hopeful even if it was clear that there were issues that were left unresolved. This was a great, engaging prequel; it gets 4.5 stars.

In Defying Gravity, Amelia and Tobias's story is told in basically two parts: the events after what happened in the prequel, Falling from Gravity, and then fast forwards to three years after. Amelia's dream has always been to become a professional dancer with an NBA team, and Tobias's had him signing as a basketball player with the pro league. He went on to pursue his dreams, ending any chance of them pursuing their connection. Now, she has the opportunity to go after hers, but he wants a second chance. However, giving it to him could mean her dream's end.

Just like the first book, Center of Gravity, in this interconnected series, the whole notion of having a no-fraternization rule presents itself as a major hurdle in the relationship of the main characters in this second book, but this is a wholly different story. I liked both Amelia and Tobias, and their second-chance love story had some major feels. It is a rather long read, but I do think the amount of time you put into it is worthwhile because in the end, you get an inspiring love story about taking chances and reaping its rewards. Five stars go to Defying Gravity. ♥