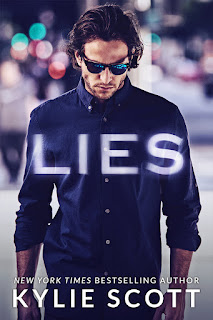 Kylie Scott's back with her latest standalone novel and it's got romance plus some suspense, mystery, and action to boot! Lies is the story of Betty Dawsey and Thom Lange, an engaged couple who are on the brink of uncoupling at the beginning of the story--an uncoupling that Thom has no idea about. You see, twenty-six-year-old Betty's been feeling a wee bit bored by her unexciting fiancé, and she's been hoping to have a serious talk with him but he always seem to be busy doing something else--and it's a "something else" that Betty is clueless about...until the condo they live in explodes and she's taken against her will by individuals making wild claims about Thom. Yes, the same boring Thom that Betty was about to leave high and dry in what is now left of their poor condo. You see, Thom isn't who he says he is; he's actually a thirty-four-year-old operative who lives a double life, but with Betty's abduction, all his lies have caught up with him. In order for him to keep Betty safe and stay one step ahead of those who are after them, Thom's going to have to come clean; Betty's about to get to know--and fall for--the real Thom.

This book had a True Lies (starring Arnold Schwarzenegger and Jamie Curtis and directed by James Cameron, 1994) feel to it--an established couple, with the female thinking her life with the male boring and the male keeping one hell of a secret from the female, who are about to go from ho-hum to oh yeah when the bad guys get in the way. The plots are, of course, vastly different other than those commonalities, and Kylie Scott does a highly commendable job weaving together all these elements to create an entertaining story. One of my favorite things here is that Betty and Thom didn't truly fall madly in love with each other until they got to honestly get to know one another while they played the whole cat-and-mouse game with the villains. It did take a while for me to connect with these two, but once I did, they proved to be interesting characters. Lies was a good overall read, one that reminds us to be careful what you wish for, but happily, it worked out for Thom and Betty. This gets four stars. ♥