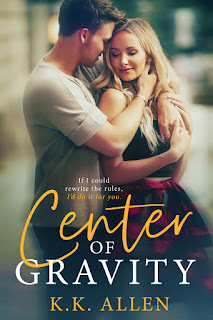 Center of Gravity is my second read from K.K. Allen, and I loved that it was a romance with the competitive world of dance as its backdrop. We have Alexandra Quinn, better known as Lex, who, along with her best friend, heads to Los Angeles with dreams of dancing for the best of the best in Hollywood, whether it be on stage or screen or in music videos. She knows it isn't going to be easy to fulfill those dreams, but she's more than ready to put in the work necessary. Standing in her way, however, is a choreographer named Theodore Noska--a man whom Lex had long admired but who turns out to be the bane of her current existence. He thinks her naive and innocent, but she knows that if there's one place where she can show him exactly that she's made of, it's on the dance floor. Theo pushes and prods this promising dancer, but when she does become part of his team, he knows she's off-limits. There's a reason why there's a rule against fraternization within the dance company. But the heart wants what it wants, and what's been brewing between Theo and Lex is something that may well be worth breaking the rules for.

This was a good read, one that I enjoyed because it delved into a world that I've always experiencing through literature and film. Theo wasn't exactly the easiest male main character to fall in love with. The guy was, for lack of a better word, a jerk. Did he manage to redeem himself? Yes, he did, and thank goodness for that because Lex was a great female main character. She had spirit and a whole lot of courage because she chose to go after her dreams. I liked the chemistry that Theo and Lex shared, and that actually included all that tension between them when Theo was being a major asshat. The character who stood out for me, however, was none other than Shane, who was Lex's best friend. I honestly wish there had been more of him in the book than there had been, but I took what I could and loved all the scenes that Shane was in. Overall, Center of Gravity may have not been as awesome a read as my first K.K. Allen novel--Waterfall Effect--but I did find myself rather entertained from start to finish. Four stars. ♥

Purchase Center of Gravity on Amazon.