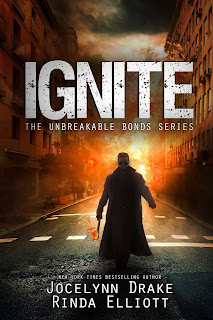 Oh my... This book was one hell of a fantastic read! But then, should I have expected anything less from the writing duo of Jocelynn Drake and Rinda Elliott? I mean, come on! It's the Unbreakable Bonds series we're talking about here, AND life is far from boring when you combine that with the Ward Security gang. Here, we've got Rowe Ward and Noah Keegan quietly contemplating their relationship and what should come next when an attempt is made on Noah's life. Soon after, he receives a call from one of closest friends while serving in the army and a fellow Ranger who also happens to be a former lover of Noah's--JB Alexander. Noah learns that their two other close friends and teammates were killed and JB suspects that he and Noah could be next. Noah wants answers and Rowe will do anything to keep the man he loves safe--even if it means heading to Washington, D.C. with a man that knows Noah intimately. But the secrets they find there lead them down rabbit hole of possible treason and the three men could end up in a fight that they have no hope of winning. But then, never bet against Rowe and Noah.

From the action and suspense to the love and sex, this book had it all! I'm proudly addicted to Drake and Elliott's writing. There's a seamless nature to all their books, and I love the fact that it isn't mostly just about the hot sex scenes. Rowe and Noah are, without a doubt, a couple meant for the rest of their lifetimes together, but I absolutely understood why they felt as if they were at a crossroads. After all, wedding bells were a-ringing for other couples and the possibility of the pitter-patter of tiny feet would be further amplified was very real. The addition of JB was one of my favorite things here because his presence opened a new line of communication for Rowe and Noah. Speaking of JB, I'm really, really, REALLY hoping we haven't seen the last of him. I was kinda hoping he'd become part of Ward Security, but I certainly won't say no the a possible spin-off--whether it be a standalone or the start of a new series--featuring a former Ranger turned cowboy in Texas. Hint, hint! If you've yet to discover the Unbreakable Bonds series, I beg of you, please read the books already! You won't regret it! Five stars for Ignite. ♥