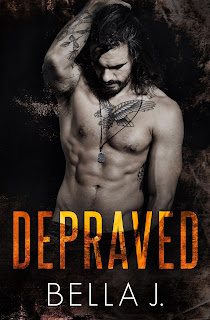 Bella J. is a new-to-me author and Depraved is my first read from her. It also happens to be the opening salvo in her American Street Kings series. Thirty-four-year-old Lincoln Walker, better known as Granite, is the president of the American Street Kings, a motorcycle club who ruled New York's underground with ruthlessness, and his club has the sort of protection that guarantees they can continue their reign without worry. That's what happens when you have ties with the police commissioner, but it isn't just the man himself that has Granite going to his home on a regular basis. Granite is lured by a girl who dances with a beauty and grace that matches everything else about her. Obsessing over the twenty-year-old daughter of the police commissioner is a disaster in the making, but Granite can't resist the pull to Alyxandria Green, and it's a pull that Alyx herself feels. But Granite is no knight in shining armor riding on his steed to make her his princess. He's hard and merciless and he's no one's prince. Granite is depraved and he intends to lay his claim on Alyx and sully his prima ballerina in every bit of his depravity.

This was a rather intriguing series starter, and I was left happily satisfied with both the author's writing and the direction that the story seemed to be headed. It is, as expected, a pretty dark read, but not overly so. If anything I'd consider it dark-ish, so if you're looking for the sort of dark read that's more dub-con (dubious consent), I wouldn't necessarily consider this book falling under that label. The pacing was a tad slower than I'd prefer. I mean, I'm all for a slow burn read, but it did take what felt like a good, long while for things to really get going here. Once they did, however, I was all in, and moving forward, it proved to be exactly what I was hoping for. Alyx and Granite were certainly a curious pairing in the beginning, but somehow, the more I got to know them--and I'm preeeeetty sure there's a heck of a lot more that's waiting to be revealed in book two, but I digress--the more it seemed that they had things that tied them together than kept them apart. That ending? Let's just say that it was absolutely perfect because it left me wanting in the best possible ways. Depraved gets 4.5 stars, and I can't wait for book two. ♥