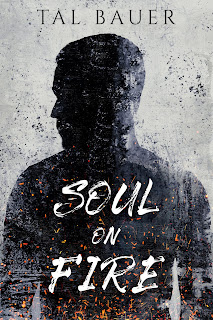 Tal Bauer's books aren't for the faint of heart, so if you're looking for fluff and stuff, I suggest you look elsewhere. However, if you're the sort of reader who appreciates intricately well-crafted stories that are so engrossing that you're going to have to block off a couple or more hours to read without distractions, then you can't go wrong with Bauer's stories. I haven't even gotten around to reading all of his published work--The Executive Office series is one of my all-time favorites of any genre--but what I have read has impressed me time and again, enough so that when I found out he had a new release slated, there was simply no way I could let the opportunity to read an ARC pass.

Soul on Fire is set in the Democratic Republic of Congo, with the country suffering the devastating effects of the Ebola virus on countless individuals. US Navy SEAL Lieutenant Elliot Davis is assigned to lead a team into a secret base in Goma and rescue officials of the CIA located there. When intel gathered shows that a cutthroat band of terrorists wants to use the virus as a weapon of mass destruction, Elliot returns to hunt  them down. He finds a valuable asset in Dr. Ikolo Ngondu who runs a refugee hospital and becomes Elliot's guide. As they make their way through the dense jungle, Elliot as a black man is taken aback by the besieged world before him now and how it compares to the world he knows in the US. Ikolo becomes his beacon, but will a dark secret blot everything out?

I live in what's considered a Third World nation, and yes, we've had areas where modern day health outbreaks have occurred and continue to occur, but I don't think we've come across an epidemic as widespread as Ebola in across the African continent. Sadly, the virus has mutated over the years and even with a vaccine, Ebola continues to spread, and it's that angle in the story that made this book resonate even more. Elliot and Ikolo had lived very different lives prior to their paths crossing, but they found a common purpose and formed the sort of connection that neither one had expected to discover amidst the devastation surrounding them. Even with everything happening in the novel, it's that underlying feeling of hope that reminds us that even a flicker of light shines bright in the vast darkness. Tal Bauer did not disappoint one single bit with this amazing read. Five stars for Soul on Fire. ♥

Purchase Soul on Fire on Amazon.