Review: Piece of My Heart by Sydney Logan 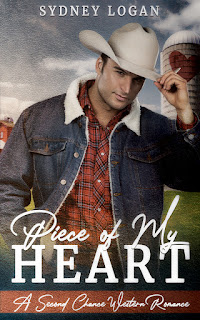 It's been over a year since I last read a Sydney Logan-penned and it was even much longer prior to that, and the release of her latest book is a reminder of why I fell in love with this author's writing in the first place. Piece of My Heart is a story about second chances and how the power of love--both as a parent and partner--can make us do things we never thought ourselves capable of. This was a sweet, clean romance with heart plus humor and angst.

At the age of eight years old, Noah Murphy knew there was only one girl he wanted to marry, but eight years later, Amber Tucker breaks his heart and leaves their hometown with another boy. A decade has passed and Amber's back with her ten-year-old son, Cade. The best thing to do would be to keep his distance. There's no love left. Just don't ask about the huge painted heart with their names on the side of his family's barn Noah freshens up yearly.

For sixteen years, Amber loved only one boy--Noah. But then she went and hurt him in the worst way possible. However, what happened back then resulted in the boy she now loves wholeheartedly--her son, Cade. She was never going to have a happily-ever-after with the husband she's left behind. Now, she's back in Cedar Grove. She never thought she'd get a second chance with Noah, and her husband is intent on making sure that she doesn't.

There was a lot to love about this book. There was no sugarcoating what led to Amber and Noah permanently going their separate ways, which I appreciated. As remorseful as she was, she owned up to her actions and acknowledged that what happened led to her being a mother to Cade. I also liked that there was still some resentment and hurt within Noah and that there wasn't this immediate reconciliation between the two of them.

For the most part, this book was lighthearted fare with a pinch of heaviness courtesy of the domestic abuse Amber and Cade experienced. For those that consider abuse a trigger, be aware that there is one particular point in the story where the abuse plays out, although it is not described in what I would consider a graphic manner. Piece of My Heart is a lovely story about holding on to hope and believing in the healing power of love and family. 4.5 stars. ♥

Purchase Piece of My Heart on Amazon.