Release Blitz: The Rogue to Ruin by Vivienne Lorret 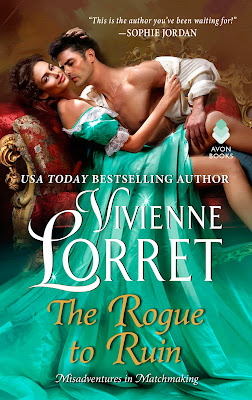 
About The Rogue to Ruin
The Bourne Matrimonial Agency has one rule: Never fall in love with a client, which shouldn't be a problem when one’s faking an engagement to the rogue across the street . . .

Ainsley Bourne needs the family business to succeed. But one obstacle stands in her way—Reed Sterling, the huge, handsome, former prize fighter and owner of the gaming hell across the street. His scandalous customers scare off all her marriage-minded patrons and since the devilish brute has no intention of relocating, she sets out to ruin his unsavory establishment. Yet when a vile suitor from her past reappears, Ainsley hastily claims an attachment to the first man who comes to mind . . . Mr. Sterling, to be exact.

Reed doesn’t know who is more surprised by Miss Bourne’s declaration. She clearly hates him, and he’d never admit their arguments simmer with unrequited attraction. Something about the pleading look in her eyes calls to Reed, and against his better judgment, he quickly plays the part of the besotted fiancé.

Pretending to be in love requires a convincing charade. But with each tantalizing touch and every scandalous kiss, Ainsley starts to wonder if Reed was ever really the enemy at all. 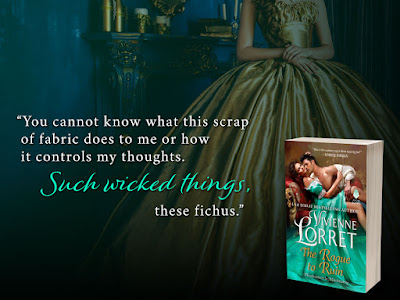 Add The Rogue to Ruin on Goodreads.

Find the Misadventures in Matchmaking series on Goodreads. 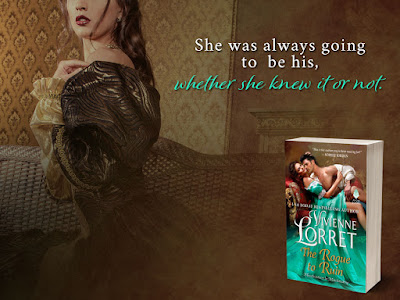 An Excerpt from The Rogue to Ruin
“Here. Let me have a look.”

“There’s no need. It’s only a . . .” Her words trailed off as his bare, blunt-tipped fingers closed over her wrist, gently but startling nonetheless. “A scratch.”

Shock quivered through her. Reed Sterling was touching her—and she was letting him!

Admittedly, during moments of weakness and errant curiosity, she had often wondered what this might feel like. But only abstractly, of course, as one might wonder what it would be like to bathe in milk like Cleopatra. It wasn’t to be done.

“Hmm,” he murmured, gently ascertaining the severity of this insignificant wound.

The warmth of his skin seeped into hers, his broad palm nestling the frantic throb of her pulse. Callused fingertips dragged lightly over her skin and her body gave way to shameful tingles, every nerve ending exposed and wanton.
She never expected it to feel so decadent. So illicit. She shouldn’t be surprised if she started to purr. Surely this was the reason society frowned on ladies and gentleman touching each other with familiarity unless a severed limb were involved.

His hands were capable and seasoned, with long thick fingers and nails trimmed to the quick. The knobby protrusion of knuckles showcased nicks and scars that told a violent history all on their own. And yet, every touch was surprisingly tender.

Even so, she should withdraw and reprimand him soundly for taking such liberties. She was appalled that she didn’t. And shame on her for letting her fingers relax, curling ever so slightly over the sturdy mound at the base of his thumb.

Thankfully, he didn’t seem to notice. Nor did he pause in his study.

Singularly focused, he bent his head, his breath coasting over the thin upper layer of her flesh. The heat of it seemed to penetrate places where it couldn’t possibly reach, collecting in humid patches beneath the fine cambric against her skin.

At once, the air in her office seemed stiflingly hot. She felt both overdressed and underdressed. She was torn by simultaneous desires to shed some clothing while donning others. The notion produced the strangest vision of herself wrapped in a coverlet while being completely naked underneath. Her breath quickened.

She caught the scent of him, her nostrils flaring on hints of warm spice and an earthy aroma—a subtle but potent mélange of salt, sweat, and undeniable masculinity. She should be disgusted by it. Instead she found his fragrance utterly—disconcertingly—appealing. So she dragged in another reckless lungful, her eyelids growing heavy.

Anyone would feel trepidation to stand this close to such a large, imposing figure. And yet, it wasn’t trepidation she was feeling. It was something else entirely. Something foreign and new.

“It doesn’t appear the cat broke the skin, but . . .” he said, his midnight timbre setting her pulse off-kilter.

“Yes?” she whispered, her throat dry. “Do you see something else?”

He shook his head, his touch careful as if he thought she was made out of blown glass and susceptible to shattering. “It’s just that . . . you have the softest skin imaginable.”

A hot shiver tumbled through her. Inanely, she stammered out a response, “I use a b-balm at night with rosehips and almond blossoms.”

He murmured an appreciative sound that rubbed a raw place, deep inside her body. A place she hadn’t even known existed until this moment.

Then, lifting his head, he winked at her, grinning. “I never would have guessed someone so thorny in demeanor could feel like this. I always thought you’d be covered in thistles.” 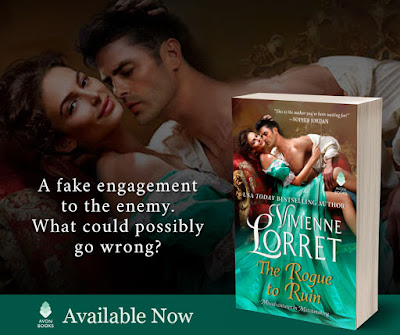 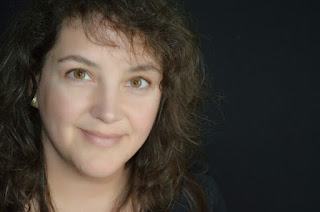 USA Today bestselling author Vivienne Lorret transforms copious amounts of tea into words. She is an author of several Avon series including the Wallflower Wedding, the Rakes of Fallow Hall, the Season’s Original, the Misadventures in Matchmaking, and the upcoming Mating Habits of Scoundrels.