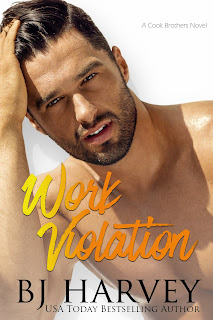 Today he's wearing navy dress pants, a white open-neck linen shirt, and a grey tweed blazer over the top. On most other men, it would be stuffy and almost nerdy. On Jax, with his black thick-rimmed reading glasses, stylishly tousled hair, and bright, all-seeing amber eyes, it looks damn not. Geeky hot, read-me-a-textbook-and-I-won't-hear-a-word-of-it-because-I'm-too-busy-imaging-you-naked hot. He-asks-you-a-question-and-you-sit-there-all-starry-eyed-looking-like-an-idiot hot.


Okay, I admit it. I'm totally addicted to the Cook brothers, and while this new book in the Cook Brothers series is only my third read from BJ Harvey, I'm quite addicted to her writing now as well! Yep, I'm a Harvey Girl (a quick note: I know Harvey Girls were all the rage in the Western US in the 1880s, and I have no clue if the author's readers are called Harvey Girls, which would be possibly thought off as sexist since she could very well have male readers, too). And because I went absolutely ga-ga over the eldest among the Cook boys' story in Work in Progress, my expectations were mighty lofty, and I was equal parts antsy and excited to see how Work Violation would turn out. Well, I needn't have worried because it met every single one of my expectations and now, I'm even more nutty over Jamie, Jaxon, Bryant, and Cohen (they do have a sister named Abi whose love story plays out in Game Saver).

Being a photographer wasn't the only reason thirty-four-year-old Jaxon Cook took notice of his soon-to-be sister-in-law's best friend from the moment they were introduced, but he's done his best to not act on his attraction to her. For a year, he's tried his damnedest to keep his distance from thirty-year-old Veronica Cook, but when they lock eyes on each other during his brother's and her best friend's engagement party, all bets were off. Maybe one night will finally satisfy Jax's curiosity of the scintillating Ronnie, but it turns out that his curiosity's been piqued like nothing else because now, he wants more from and of her. She's making changes in her life and having Jax become a part of it feels almost natural, but when he finds out that she happens to be part of his Introduction to Photography class at his alma mater, will it mean the abrupt end to something extraordinary that's just beginning?

I loved every single thing about this book, but what absolutely earned my absolute admiration was the direction the author decided to take with regards to the whole professor-student angle. Talk about catching me by surprise and in the best possible way. I cannot recall that particular plan of action being taken in any of the teacher-student romance trope books I've read, so it definitely was something I consider refreshing and simply a smart change of pace. I adored the romance and the sex between Jax and Ronnie, and the humor had me switching between smiling and laughing. As always, the family angle was something I appreciated, and the more individuals become part of the Cook fold, the more endearing they turn out to be, which is a feat on its own considering they were already pretty darn endearing to begin with! I'm highly recommending you pick up Work Violation. Five-plus stars. ♥