Review: It's Not Over by Kaylee Ryan & Lacey Black 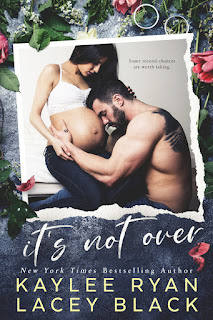 Authors Kaylee Ryan and Lacey Black join forces to co-write a second-chance love story between a formerly married but still in love couple that are brought back together by unexpected circumstances. It's Not Over finds Harrison and Gwendolyn Drake very much in love but they're also on their way to getting divorced. With the ink barely dry on their divorce papers, Harrison and Winnie end up sharing one last intimate moment together before going their separate ways. It's not until some time has passed that Winnie discovers the unfathomable--she's six weeks pregnant, which is also how long it's been since she was last with her now-ex-husband. Winnie cut off all communication with Harrison after their time together, but now, she knows that she'll have to tell him that they'll be parents in several months' time. Having a baby doesn't mean they're getting back together, but Harrison has regretted signing off on the divorce from the moment it happened and this time, he intends to fight for his family.

This novel was about second chances with a couple of twists and neither one is a true spoiler: the main characters are divorced within the first chapter (the end of the marriage is mentioned in the blurb) and they get pregnant (as you can pretty much tell from the book cover). This was an interesting read, and for the most part, the authors clearly worked well together creating a story that shows that true love is worth fighting for. However, I did have certain issues. First, Harrison and Winnie (aka Gwendolyn, who was also called Gwen throughout the book and while she's "Gwen" in the blurb, her POV intros were all under "Winnie") claimed they didn't want the divorce, yet neither one really did much of anything to stop it, both choosing to wait and see if the other would fight for their marriage. Sigh. I'm not against them divorcing, but for two people who had never stopped loving each other, they sure stopped wanting to be proactive in pushing for the marriage to work through its issues. So, it didn't quite jibe.

Then there was the pregnancy, although just like the divorce story angle, I wasn't totally averse to this particular plot twist as much as the last thing I'll be mentioning. With them allowing the divorce to push through, it felt as if the pregnancy was what they needed to realize that they still should be together. But then it was more of like, why'd they have to wait for that? However, as with the divorce, I understood that the pregnancy was a necessary thing for the authors' plot, so fine. I was still okay with the story and I really did enjoy what I was reading. And then BAM! There was this angle that was inserted and it quickly became obvious that it was meant to sow conflict, but was it necessary? Nope. I'm all for angst but drama for the sake of drama? Yeah, no, thank you. The story would've still been strong without it, and I'm choosing not to mention it since it wasn't hinted at in the blurb. Taking the good with the not-so-good, It's Not Over gets 3.5 stars and hope Chase and Gabby get their story published soon. ♥

Purchase It's Not Over on Amazon | Apple Books | B&N | Kobo.