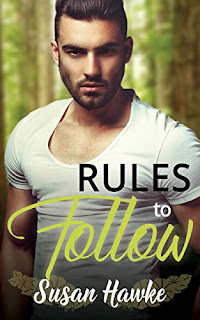 I may have become a wee bit addicted to Susan Hawke's Lovestrong series, so when she announced that she was going to start a new series, I was both anxious and antsy. The former had to do with this new setting and cast of characters and the latter with just the overall excitement to get my greedy hands on Hawke's newest release. The new series is entitled Davey's Rules and it's all about boys and their Daddies and how not all relationships that may share one kink are the same. Oh, and the titular Davey? He's a brat who's outspoken and may be a stickler for his own set of rules, but is wonderfully loyal and loving to those who mean the most to him. Sounds interesting, right? Just a quick trigger warning for book one: domestic abuse does take place off-page between one of the main characters and his then-boyfriend, so consider yourself forewarned if that's a sensitive subject or hot button topic.

Rules to Follow is the first book in this new series, and it's about Adam Nichols, a college senior who leaves his abusive boyfriend but is now left without a home nor a job. When his old friend Davey Hendrickson saves the day by not only offering him a temporary place to stay but a referral for a job as a busboy at Daddy's Lap, the same private kink club that Davey works at as a bartender. More stability, however, comes in the surprising form of one of Davey's other friends, a lawyer named Travis Miller, who has a room for rent. The new roommates forge their own friendship, and with Adam's curiosity piqued at his new job, he can definitely see Travis as a Daddy. However, Travis has a secret and it seems that Adam is the only one who doesn't know. They may not have any rules in place for either one to break, but when Adam learns Travis' secret, it could be both their hearts that may end up broken.

This was a slow burn romance, and I think that because of Adam's previous relationship, this was the ideal direction for their story to take. This allowed me to get to know Adam and Travis better, and it was easier for me to become invested in their story, especially since it became clear that these two, indeed, belonged together. The diva that is Davey was a bit of a scene-stealer, but it works here because, after all, it's his rules that are mentioned time and again. Speaking of those rules, I was rather tickled pink to find three that I suggested among the guy's eighty-nine (at last count!) rules for his future Daddy! I suspect his story will be the last one in the series, and rightly so because I'm pretty sure his journey to his happily-ever-after will be a doozy. But back to Adam and Travis! Their story was a delight to read, and I appreciated the hint of angst. Five stars for Rules to Follow. I can't wait for more! ♥