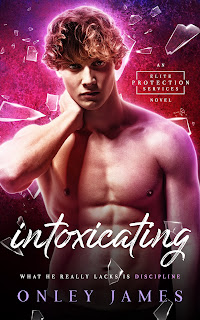 He wished he could get his heart to see this for what it was, but he just didn't know how. When he was in Linc's arms it didn't feel like a fling... it felt like love, and made Wyatt want to cry.

This weekend has been one where I've had the distinct privilege of coming across three highly notable new-to-me and debut authors, and one of them is Onley James, whose Elite Protection Services series starter left me deservedly impressed and eager for more. Intoxicating is the title of book number one and it's a story that does come with a number of trigger warnings, so let's get those out of the way before going forward with this review. There are past and present instances and mentions of self-harm (including attempted suicide) and abuse (physical and emotional, as well as sexual trauma). While the author doesn't gloss over these parts, I wouldn't consider them overly graphic. However, please note that what may not be graphic to me, may be graphic for someone else.

Intoxicating is the story of a twenty-two-year-old surviving son of a senator and the forty-year-old bodyguard who is brought in to keep him in line. It's clear from the moment we meet Wyatt Edgeworth that he's barely hanging on. No matter what he does, he can't live up to the expectations of his conservative father, and suffers abuse for his being gay and not being the son that died. When Lincoln Hudson is assigned by his boss to watch over Wyatt, he's informed by Wyatt's father how spoiled his son is and that he's been acting out. It quickly becomes obvious, however, that there's more going on than meets the eye. The more time Linc spends with Wyatt, the more he catches glimpses of the hurt he's been living with. As drawn as he is to the younger man, though, Linc needs to stay within the boundaries in order to keep this job, but what if what Wyatt needs isn't a bodyguard but a Daddy?

I loved how much this book surprised me. There was a whole lot more to it than the whole aspect of sex and kink. There was an honest-to-goodness story that needed to be told, and I simply sat back and enjoyed the heck out of what Onley James put down on paper, so to speak. My heart went out to Wyatt, and Linc became such a strong source of support and understanding for him. This also had a notable supporting cast of characters, with the ultimate standout being Charlemagne Hastings, who was sassy as fuck and spoke her mind. This had angst and wit, with James balancing it all to perfection. I can't wait to read more from this series. Five-plus stars for Intoxicating. ♥