Review: The Dust and the Roar by Cat Porter 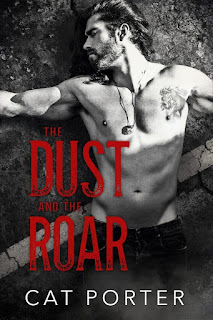 “A good time is a good time,” I said, “but your bike, man, you got nothing without your bike.”

I've read every single one of Cat Porter's books, but all it took was the first one--Lock & Key--to clue me in on an undeniable fact that's been reiterated which new release she's published: Porter is a storyteller extraordinaire. With her latest novel, The Dust and the Roar, she gives fans and readers the story of Richard Tallin, who as Richie left his hometown a boy who wanted to do the memory of his beloved father proud and returned a man haunted by a war that could not be won and who would go on to be given the name of Wreck, found love, and helped to bring a motorcycle club from Meager, South Dakota into legendary status. Now, doesn't that sound quite fantastic?

This book serves as an origin story--well, at least that's how it felt to me--and takes place from the mid-seventies and onwards. It's also part of the author's Lock & Key book universe, so fans of the original series like me will consider this a wish fulfilled. However, if you've never read any of those books, you can still dive into The Dust and the Roar without any fear of feeling like you're missing something. This novel truly is a standalone, and you can even think of it as an ideal start-off point should you decide to go ahead and read all of the prior books afterwards.

There was a motorcycle club--more than one, actually--and there was romance, but I wouldn't necessarily classify this as an MC romance. This really was Wreck Tallin's life story, and though we don't get full-on details of his first twenty-two years of life, there are enough tidbits mentioned to show that he had a father who loved him and raised him into the man he is when we do meet him in the book. Cat Porter doesn't make Wreck some mythical man who can do no wrong. He is fallible, and to be honest, I prefer the main characters in the books I read to be that way, making them far more realistic and easy to relate to. There are moments that will break your heart, but at the end of the day, The Dust and the Roar to me is about the resilience of one remarkable man. Five-plus stars. ♥

Purchase The Dust and the Roar on Amazon.