Review: My Blue by Emery Jacobs 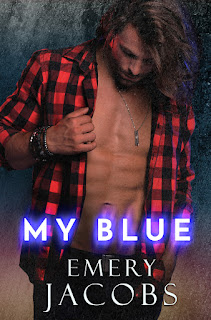 Undeniably His is my favorite read from Emery Jacobs, and her latest release is a companion book featuring Leo Matson, younger brother of Beau Matson from the aforementioned novel. My Blue is a second-chance romance with a bit of a twist. When Leo was eighteen, he was madly in love with his Blue--seventeen-year-old Ella Blue Kincaid--and knew that she was the one for him. But not everyone believed they belonged together, and like it or not, they were forced apart. Ella Blue disappeared without a word of goodbye or any inkling as to where she may have gone. Eight years pass before Leo happens to find his Blue, but while he's never forgotten a single thing about what life was like without his girl by his side, Ella Blue can't remember anything that's happened in the time they've been apart. Her last memory was their last night together, and now, not only does she find herself trying to rediscover eight years' worth of moments and recollections, she needs to figure out why she has amnesia in the first place. She and Leo will have to get over their heartache and see if there's a shot for them to be together again.

This was a relatively quick read and I appreciated the creative touch of the memory loss angle. This is one of those stories that have the main characters falling in love while they're still teenagers and then being torn apart by outside forces. I seriously liked Leo--maybe even a smidgen more than I did his brother in Undeniably His but don't tell Beau I said that!--and adored how devoted he was to the memory of what he and Ella once shared. Ella wasn't so bad, but there were moments where her naivete was so obviously her greatest weakness, and I'm talking about when she was already in her twenties. A handful of supporting characters I liked way more than I did the majority of the others, and there were a couple who I was super dubious about and it seemed as if Ella was as well, but then her naivete seemed to allow her to give them a pass. The pacing of the story was pretty good for the most part but then it hit a point in the book where it felt like someone pressed the "fast forward" button and everything was rushed, which sadly, led to skipping over pertinent details, and leaving some loose ends. 3.5 stars for My Blue. ♥

Purchase My Blue on Amazon.