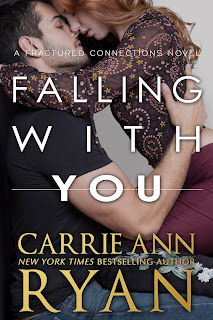 Note: An advanced reader copy (ARC was provided by the author via Give Me Books Promotions.

And maybe it was okay to fall, just this once.


Falling with You is the third full-length novel in bestselling author Carrie Ann Ryan's Fractured Connections series, and goodness, but how this book had my heart clenching in my chest. If you're a fan of the series like me, then you've probably been as anxious as I've been to finally read Aiden Connolly and Sierra Knight's love story. Curiously enough, it's not a story that begins with hate, even though that's the vibe the two main characters have been familiar with from the get-go of this series. See, Aiden and Sierra have known each other for years; heck, they even used to be actual good friends. But Aiden went and fell in love with Sierra's best friend, Allison Pritchett. Yes, Aiden and Allison broke up anyway, and now Allison is gone, and it's a loss that's hit everyone hard, but especially the two people who were closest to her. Aiden and Sierra have the whole pushing-each-other's-buttons down to a science, but things have been shifting between them as of late. An act of violence push them closer to one another, but in order for them to have any hope of moving forward, are they willing to open up about their pasts?

Gah! Of course it would be take the third book to break me! Don't get me wrong; I loved the first two novels, but this third one actually had me tearing up. There were things that were revealed that didn't really surprise me, but then there was the one huge secret that left me heartbroken for everyone concerned, especially because it was a secret that was carried for so long by the parties involved. As far as Allison's passing goes, I think that not getting a full resolution--i.e. everyone finding out what pushed her to take her own life--was something that made sense. Sadly, the fact is that the living don't always learn what may have been going on in the other person's heart and head that led them to do what they did. It isn't easy, but you need to move forward because life goes on. Everyone felt the loss of Allison, but it was Aiden and Sierra who were affected by it more deeply for different reasons and possibly more so for the latter than the former to a certain degree. This book--this series--is heavier than the author's usual work, but there was almost like a catharsis that I went through while reading Aiden and Sierra's story. It's difficult to explanation, but suffice it to say that the Falling with You was a beautiful story about love, friendship, and family, all prevailing themes in the series. Five-plus stars AND there's a fourth book slated for 2020! ♥

Read my reviews for the Fractured Connections series:

Breaking Without You (book one) - five stars - My Review

Shouldn't Have You (book two) - five stars - My Review

Purchase Falling with You on Amazon | Apple Books | B&N | Kobo.