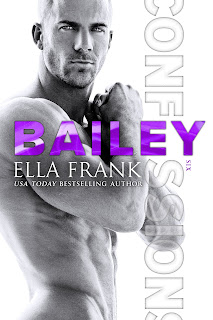 Henri leaned over and pressed a kiss to his lips. “I'm not in love with Joel Priestley.” It took everything Henri had not to blurt out, How can I be, when I've fallen in love with you?


Oh, be still my heart! Logan Mitchell once laid claim over my whole heart while I was reading the Temptation series, only to end up sharing it with Joel Priestley once I was done with the first four Confessions novels. I should have known if anyone was going to force those two to share space with him, it would be Henri Boudreaux. Don't get me wrong--I adore these men's respective life partners, but these extraordinary men were the ones who felt the most in control of their emotions, with walls fortified over the years, so when they finally allowed themselves to be more vulnerable...well, cue the endless le sighs on my end because I went from smitten to swoony in love with these Logan, Priest, and Henri. But of course, they wouldn't have gotten to that swoon-worthy level of theirs without the men who made them better than they were, and in the case of Henri, well, no one could have suited him better than a by-the-books, sensitive, and all-around good cop in the form of Craig Bailey. Inasmuch as I love Priest, he was always meant for his husbands, just like Henri was meant for Bailey, and these two were so perfect.

Bailey picks up where Henri left off, with the chemistry between private investigator Henri Boudreaux and police officer Craig Bailey hotter than ever. But where it was purely all about the physical in the beginning, both Henri and Bailey are becoming attached, and neither one is entirely sure what to do about it. Henri knows Bailey deserves someone with a far better track record than him, but damn if he can even consider cutting ties with him. There's also the added complication of Henri's being a confidential informant and his own connection with Bailey's older brother. He suspects Bailey's feelings come close to his own, but with his kind-hearted and open-minded cop being as straight-laced as he is and seeing things usually in black and white, will the man Henri is falling for be as understanding when he learns what Henri did for the boy he once loved and be the light Henri needs in the dark?

LE. SIGH. In the previous book, we already get to see Henri changing into a man who wants to be better for Bailey. In this final Confessions novel, it's Bailey who has to make certain choices and come to necessary decisions with as far as his relationship with Henri is concerned. I felt for these two because it was always clear how seriously Bailey took his oath as a police officer, but then he went and fell in love with a man who not only toed the line between the law and what was considered criminal, but he outright broke it more than once in the past. So, what will reign supreme: his adherence to protect and serve or his love for this man who's changed Bailey's world? I could go super corny and say that Bailey should protect both their hearts and serve the betterment of their relationship, but I'm trying to be more eloquent since there is a certain quiet eloquence and beauty interspersed with the harsher elements of Henri and Bailey's story. Bottom line and my final Confession: I loved Bailey and give it five-plus stars. ♥