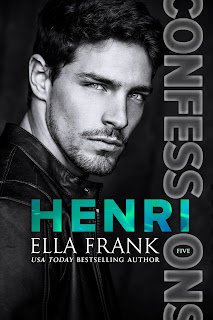 
When the throuple that is Joel Priestley, Julien Thornton, and Robbie Bianchi got their happily-ever-after at the end of The Princess, the Prick, and the Priest, I honestly thought the Confessions series had come to a close. Was I left hoping that one particular peripheral character would get his story told? Yes, I was, but I had assumed (yes, yes, I know what tends to happen when one assumes…) it would be through a spin-off series. I should have known second guessing Ella Frank, especially when it comes to her much beloved book universe set in Chicago. Instead of a spin-off, what we have here is Henri, the fifth novel in the Confessions, where we get the story of Henri Boudreaux and Craig Bailey, which will be continued in Bailey, the sixth book and the conclusion to their duet. This can be read separately from Priest, Julien, and Robbie's quartet, but in order to have a wholly more informed and comprehensive enjoyment of Henri and Bailey's love story, I recommend you read the first four Confessions books.

Henri Boudreaux is a man who has no qualms bending the law to suit his needs, so of course fate would mess with him and throw Craig Bailey, a bona fide member of Chicago's law enforcement, his way. Henri and Bailey don't have a whole lot in common, but the common denominator they do share comes in the form of none other than Henri's ex--also known as the only man Henri has ever loved--and his husbands plus one other thing that Henri isn't all too sure about. Maybe one time together will help them get the other out of their systems, but one time simply leaves them craving for more. But Henri knows Bailey deserves a better man, and Henri knows it's not him.

There's a moment in the story where there's an instant recognition of something more between the main characters, and that's how this entire book felt: MORE. I mean, I go into this author's books and I expect nothing but her best, yet somehow, she's managed to once again one-up herself with this newest novel of hers. Henri has Ella Frank's patented take on sex and romance, but with the added element of suspense that quietly buzzes underneath it all, this book has set itself apart from the four books that came before it. The connection that Henri and Bailey share is as undeniable as it is seemingly limitless, but there are secrets on Henri's end, particularly when it comes to his past back in New Orleans and what he currently does in Chicago, that are poised to become sticking points in the second part of their duet, Bailey, which is scheduled for release in October. Aside from Henri and Bailey's developing relationship, the dynamic between Henri and Priest is as intense as ever, though can I just say that I'm glad Henri's attention and affection are now directed elsewhere, elsewhere being Bailey, of course. With the ending in Henri, I'm sure things will get oh-so-complicated in Bailey, and I, for one, cannot wait! Five-plus stars. ♥