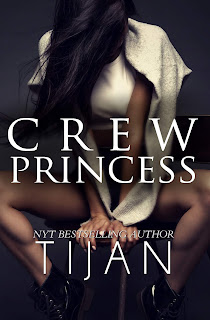 “Baby.” He tucked his head down and kissed my neck. His entire body shuddered. “I've never been more in love with you.” He tipped his head back, staring deep at me. “I love you. YOU. No one else would fulfill me. No one else would make me feel excited for the day, grateful for the day. No one else makes me feel like I'm half a person. My other half is in my arms. No matter what happens in the future—where we go, where we don't go—this stays.”


Oh. My. CREW!!! Gah!!! This book was...EVERYTHING. Crew earned its place on my year-end list of favorites last year, and while I had no doubt that the second novel in the series by the same name was going to do the same, I had no frickin' clue just how much of a game changer for the series this ended up being. I know that there are a slew of other new releases out there that share the same date--or have gone on to release early--but Tijan's Crew Princess is in a very different class altogether. If I could only recommend a single new release, it would be this one.

In Rousseau, there may be more than one crew, but no one comes close to the Wolf Crew. It may have the smallest number of crew members--Cross Shaw, Jordan Pitts, Zellman Greenly, and Bren Monroe--but just like the pack it's named after, the ferocity this crew lies underneath the surface, ready to come out whenever and wherever. They're not just crew--they're family, but just like anything else in the world, change is inevitable. What happens when the boy she loves, her two closest friends, and everyone else have plans of moving on while Bren...doesn't?

Most of Crew Princess's characters may be teenagers (between seventeen and eighteen since they're seniors in high school), but if you think this is nothing more than another young adult (YA) romance, think again. If you're familiar with Tijan's writing, you know that while a lot of her books have main characters who are teens, the stories they tell aren't your typical YA romances. The situations they find themselves in may not seem like your everyday sort of teen scenario or backdrop, but you may be surprised to find out how familiar they can be to other readers.

Because this is the second in a continuing series involving the same main characters, I suggest that the books be read in order. That being said, the series also has familiar characters from the author's previous releases--namely, the Fallen Crest High series and The Boy I Grew Up With, as far as I know--but with me only having read the latter (I know, I know! I need to get started on working on the FCH series!), I feel that it's pretty safe to say that you can go ahead and read the Crew series without reading either one. However, be prepared to have your curiosity piqued!

I loved seeing how much Bren has developed as a main character in this second novel. She's definitely not a "Normal", but she's also grown a great deal and has a better handle on striking a balance between the Bren who is part of the Wolf Crew and in love with Cross to the Bren who is Channing's younger sister and so on. She's also facing the usual challenges a teen her age has: that of what happens after high school graduation. Changes abound and Bren, as well as her family and friends and their hometown, must stand together in order to get through it all.

There's a great deal of tension in this book, but Tijan never overplays her hand, creating instead a story that has you immensely invested in the outcome while leaving you craving for even more from this book universe. Even with characters this young, there's nothing juvenile about their experiences, inviting readers of any age group to not only enjoy reading the book but also immerse themselves fully in the comings and goings of this cast--just ask any fan of the author's interconnected books. Crew Princess is, indeed, one of 2019's stellar reads. Five-plus stars. ♥

Read my reviews for the Crew series: