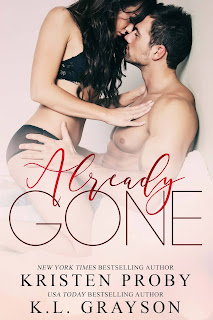 When two bestselling authors decide to team up and write a book together, expectations are bound to be high. In the case of Kristen Proby and K.L. Grayson, both of whom have strong followings and loyal readerships and whose work I've read and enjoyed immensely over the years, their initial foray into the world of author team-ups was one that I would consider successful. The writing styles of Proby and Grayson meshed rather well, making it difficult for me to decide who wrote which parts. Already Gone is a standalone, but I hope it isn't the last we've seen of this new writing twosome. With a handful of angst, a healthy dose of humor, and a whole lot of romance, this novel is one that mustn't be missed, regardless of whether you're a reader of these two or love romance fiction in general.

Scarlett Kincaid was once Tucker Andrews's best friend and the girl he secretly loved, but while he was waiting for the opportunity to confess his feelings for her, she was waiting for an opportunity to get away from the place she never quite considered home...and she grabbed it, leaving Tucker, her family, and the town of New Hope, South Carolina behind. Twelve years pass before Scarlett finds herself back in New Hope due to familial obligations. She may be one of the biggest country music stars around and beloved by fans, but the cool reception she receives upon her return leaves her dumbfounded. She's used to her younger sister's disinterest, but not the look of disdain mixed with hurt from her former best friend, Tucker. He's grown from the boy who deserved better to a man with responsibilities to the town and his daughter. Rekindling their friendship and becoming more would be a mistake, especially with Scarlett leaving for Nashville again. Will Tucker risk his heart again for the girl who'll soon be gone?

I'll be honest, I was afraid that this was going to end up with me giving this book a lower rating than what I ended up giving it. I was NOT a fan of Scarlett's for a good portion of this novel, with me going as far as being miffed at Tucker for being nice to her as quickly as he did. Heck, I even empathized with Scarlett's sister, Alexis, and understood why she was as ticked off as she was. But at the end of the day, Scarlett had her reasons for leaving, and when I took a step back, I got where she was coming from, although there's really no excuse for her staying away from New Hope for as long as she did, choosing her own methods to spend time with her father instead. Did she win me over? Yes, she did, but it took a good, long while to get there. Thankfully, I quite liked Tucker, even though I wasn't thrilled with his daughter, Chloe, and her less than respectful behavior. He was a really good guy with a forgiving nature and loved beyond measure. Now, there were a couple of supporting characters--namely Tucker's brother and cousin, Dean Andrews and Scooter Bennett, respectively--who piqued my interest that I'm hoping will get their own happily-ever-afters soonish. Fingers and toes crossed! Already Gone earns itself 4.5 stars. ♥