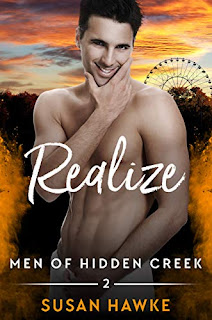 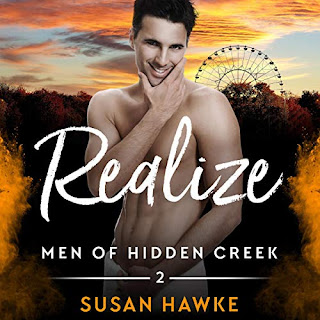 Note: An advanced reader copy (ARC) and the audiobook were provided by the author via LesCourt ARC Team.

I'm still fairly new to the Men of Hidden Creek series, having only listened to the first audiobook in this series's latest season, but that certainly didn't take away from my overall listening enjoyment of Realize, the second audiobook for season four. Written by Susan Hawke and narrated by Nick J. Russo, this was a sweet story about two best friends--one who loses his wife and the mother of his children and the other who steps in and becomes the greatest source of support for his best friend and his two godchildren. But this is also more than just a friends-to-lovers story. This is also a story about family and friendship and overcoming the odds for as long as someone has your back.

After losing both their house and his wife to a horrible fire, Parker Wilson and his two children, Cindy and Teddy, were taken in by Max Jackson, Parker's best friend. Three years later and the two twenty-year-olds have created a true home for the now eight-year-old Cindy and six-year-old Teddy. When Parker loses his job--and along with it his health insurance--he isn't sure how he can afford to pay for Cindy's expensive diabetes medication. The one possible solution? That Parker and Max get married so that Parker and the kids can get on Max's health plan. It shouldn't be too difficult to be fake husbands, right? But what if one--or both--of them starts wishing that what they shared was real?

Susan Hawke, as usual, never ceases to bring me in with her beautifully written love stories, and she's done it again with this Men of Hidden Creek contribution of hers. Aside from the heaviness in the beginning of the book, this is a fairly lighthearted read with Max and Parker working like a well-oiled machine when it comes to taking care of Cindy and Teddy. There's Parker trying to figure out his sexuality, but there isn't any unnecessary drama attached to it, thank goodness! With Nick J. Russo doing yet another stellar job as narrator, the story is truly brought to life and made for one of my favorite listening experiences this year. Realize is an audiobook not to be missed. Five stars! ♥

Purchase the Realize eBook on Amazon.

Purchase the Realize audiobook on Audible.