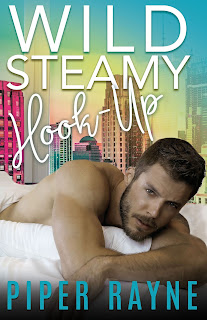 The writing duo of Piper Rayne close out their White Collar Brothers trilogy with the best of the lot! Wild Steamy Hook-Up is all about the eldest of the Mancini brothers, and it's a friends-to-lovers romance with a drunken surprise marriage twist to it. Thirty-six-year-old Dominic Anthony Mancini had no plans of settling down with one woman, but after one night of celebrating and drinking, he wakes up to find himself married to none other than Valentina Daniella Sommerland (née Cavallo), also thirty-six and the one woman he knows he shouldn't be with. Of course, Val's heart has belonged to Dom for two decades, offering it up to him on a silver platter, but the stubborn guy has never laid claim to it, much to Val's disappointment. As strong as her feelings are for him, however, she certainly never planned to end up with a ring on her finger while terribly inebriated. They both know that the most sensible thing to do would be to file for annulment, but then their mothers step in and insist that Dom and Val remain married. Giving it three months should be more than enough time, but what if they want forever instead?

If you've read the first two books in the White Collar Brothers series, then Dom being super stubborn shouldn't come as a surprise. I swear, I was tempted to shake the man a time or two (or ten) because I just wanted him to go after what he wanted. But nope, the guy wasn't budging all that much, no matter how much his heart wanted him to. I will say this about Dom, though, he's a good guy who truly does care about Val, and he does have his reasons for choosing to stick to the friend zone. Speaking of Val, I so cheered for her from start to finish. She wasn't the sort of woman who was going to allow anyone to steam roll over her...well, maybe except for her parents, but then I could absolutely empathize with her. It takes a bit of back and forth and hemming and hawing from these two main characters, but yes, they do get their happily-ever-after, just like Dom's two younger brothers before him. I loved how the authors wrapped everything up with this third and final book. Reading about how the Mancini brothers, all confirmed bachelors, found love and fell hard has been a treat! Five stars go to Wild Steamy Hook-Up. ♥

Read my reviews for the White Collar Brothers series: