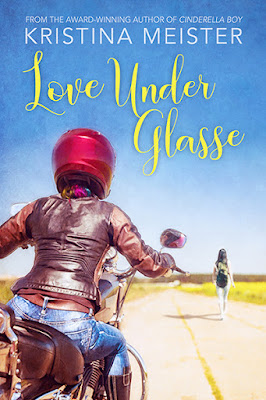 About Love Under Glasse
This runaway might want to get caught.

El Glasse’s mother controls her life. What she does, who she dates, even what she’s allowed to say. El only has two ways of holding onto her freedom. One is her popular anonymous blog, hidden from Mama Glasse. The other is what she so often blogs about: her feelings for Riley, the girl who works at the ice cream parlor. Riley is fierce, free, and rides a killer motorcycle, and El cannot help but love her. But Mama Glasse can never find out about her sexuality—unless El is willing to rebel.

When El runs away, Riley feels responsible. She knows what it’s like to be alone, and she can’t deny her deep desire to learn El’s story. In a move she might end up regretting, she makes a devil’s bargain with Mama Glasse to hunt El down.

Riley isn’t trying to bring her home though, because she knows an evil spell when she sees one—a spell of fear and shame El is finally starting to break. This huntress might lose her own heart, but it’s a risk she’s willing to take.

Add Love Under Glasse on Goodreads.

A Guest Post from Kristina Meister
Seven Strangers
Love Under Glasse is a retelling of Snow White, and just as in the classic story, my main character, El, runs away from home. On her journey, she encounters a series of people who are all loosely based on the infamous seven dwarves. My largest dilemma was in figuring out how to introduce these quirky but crucial characters in ways that weren’t formulaic or contrived. I don’t know what Disney has taught you, but finding a house occupied by seven pivotal characters is a bit unrealistic.

The “helpful stranger” is a common guest star in most fables and tales, but one that strikes a skeptical note from the generation taught not to trust people they don’t know. I felt it was important to show positivity, and also to create growth for El, who has never felt safe or as if she could trust people. So rather than have El end up in a group home or something like that, I decided that she would have to encounter her rescuers gradually. Each time she gets overwhelmed, the kindness of a stranger wakes her to the inherent decency of people at whom her mother would never have looked twice.

I am kind of obsessed with mysteries, and so I watch a lot of shows that have to do with unexplained events or interactions that people have with strangers and so on. For two of my “dwarves”, I was inspired by an episode of Unsolved Mysteries—the original Robert Stack episodes, of course—in which a young lady recounts her story of running away from home as a teenager. She finds herself on a bus, and is frightened and overwhelmed. The adventure begins to wear off when some rough looking men board the bus, one of whom is called Doc. In the episode, she explains that she was initially terrified of them, but as the trip went on, they ended up looking after her, talking with her, and in big brother fashion, convincing her to call her mother. I loved the story and as all good plot bunnies do, it tugged my mind in the direction of working it into a book. That had Doc covered, but which of the six remaining could I pair with him? The most likely solution was of course the only one with a medical condition: Sneezy.

After I had those two, others began to fell into place. Sleepy ended up being the vague and unfocused store clerk who gives El the idea to follow the railroad tracks as her true adventure begins. Then I decided that I definitely had to pair Dopey with Grumpy, so that neither one came on too strong. This gave me the added ability to explain “Grumpy’s” attitude and work it into the plot in an important way. The girl El encounters, playing the role of Grumpy, has a tragic, but all too common life story, one based on yet another true crime case I’ve seen on documentaries. The girl’s plight drastically changes how El views the world and her situation.

I was essentially down to Bashful and Happy, and it became pretty easy to place those. Bashful became “Bash” whose autism was often misinterpreted by the people around him. His quiet assistance reinforces, for El, the idea that good people come in all shapes, and there is no correct way of existing. He also becomes useful for El’s love interest, Riley, as the huntress tries to track El down.

All that was left was Happy, and I knew that character had to be the last of the friendly helpers El would encounter. Happy kept her name, and became a tattoo artist, loosely based on a friend of mine. Most fairy tales end…excuse the pun…happy. So it was important to me to use Happy to lull my characters into a false sense of security. No spoilers, I just am that kind of story teller. Too much Joss Whedon, I guess.

About Kristina Meister
Kristina Meister is an author of fiction that blurs genre. There’s usually some myth, some mayhem, and some monsters. While Kristina’s unique voice and creative swearing give life to dialogue, her obsession with folklore and pop culture make for humor and complexity.

She and her mad-scientist husband live in California with their poodles Khan and Lana, and their daughter Kira Stormageddon, where they hoard Nerf toys, books, and swords—in case of zombie apocalypse.

Giveaway
To celebrate this release, Kristina is giving away a custom ordered biker-style patch that represents El and Riley, as well as a signed copy of her award-winning novel Cinderella Boy! Leave a comment with your contact info to enter the contest. Entries close at midnight, Eastern time, on August 31, 2019. Contest is NOT restricted to U.S. entries.

Thanks for following along, and don’t forget to leave your contact info!