Review: The Guy from Glamour by Skylar M. Cates (The Guy #1) 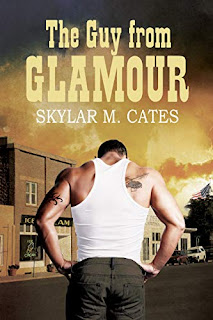 The Guy from Glamour is a re-release of the first novel in Skylar M. Cates’s The Guy series, which was originally published by Dreamspinner Press in 2014. Receiving a personal call while stationed in Afghanistan is something that’s never happened to Captain Dean Pierce, but it’s one that proves to be a life-changer. Learning that his older sister, Jenna, has been killed in a car accident, Dean knows that taking temporary leave in order to return home to check on his thirteen-year-old niece, Nicki, is a must. The fact that he hadn’t spoken to Jenna in years and that he’d never met Nicki is more than enough to make Dean feel anxious. He needs to help find the right foster home for his niece who barely acknowledges his presence and who makes him feel even more out of his element. Dean, however, finds an ally in Nicki’s guidance counselor, Anthony Carrino, as well as the man’s entire family that’s taken in Nicki and her pup temporarily. This was supposed to be a quick, two-week thing, but then Dean took into account the possibility that he would adore his niece and fall in love with a guy from Glamour.

This was such a surprisingly great read, one that had a slow but steady pace that I enjoyed. Dean was awkward and felt so out of place, but he was also carrying his feelings of grief and guilt while trying to figure out what steps to take for his niece. Family was such a foreign concept to him, and I liked that he unexpectedly found both family and home with Anthony and the Carrinos and the town of Glamour when his purpose was to find exactly that for Nicki. It was touching seeing Dean forging a relationship with his niece, neither one of them wanting to hope for too much while also quietly needing that familial bond. Then there was Anthony, who I quite adored, and how he was rather smitten with Dean but also trying to protect his already bruised heart, no thanks to his jerk of an ex. I’m glad that I finally had an opportunity to read this book since I never got to do so when it was originally released. The Guy from Glamour was a four-starred start to the author’s The Guy series, and I look forward to the rest of it.

Purchase The Guy from Glamour on Amazon.