Review: Girl by Any Other Name by MK Schiller 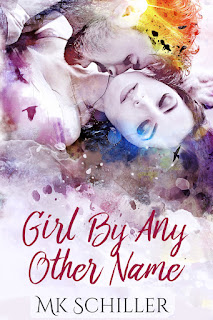 Originally published in 2013 under a slightly longer title, Girl by Any Other Name is a romance novel with an element of suspense to it. Penned by MK Schiller, this is the story of a boy who meets a girl when they're both ten years old. It takes a couple of years for them to become friends, and another two years for them to fall in love. Three years later, she dies. Or at least that's what they told Caleb Tanner about Sylvie Cranston. However, Caleb refuses to believe that the biggest part of his heart--of his soul--is simply...gone. Instead he waits for her to make her way back to him, and ten years later, she does...except she says her name is Sophie Becker, a twenty-five-year-old student in his English literature class. She claims to not know who he is or who Sylvie Cranston may be, but Caleb knows better. He wants to find the truth and to protect her from whatever--or whoever--took her from him before. Abel may not have at a say when his Sylvie disappeared a decade ago, but this time, he isn't letting her go.

This was a pretty good book, with the first half turning out to be truly compelling as we read about Caleb and Sylvie and his undying devotion to her memory after she disappears from his life. The second half...well, it falters quite a bit once the truth is revealed, and while my suspicions as to what may have really happened a decade ago prove to be right, it was almost as if we were just plodding along until we got to the end. That's not to say that MK Schiller didn't have a fantastic story to tell--she did, and as I mentioned, she had me hook, line, and sinker for the first half of Caleb and Sylvie's tale. Her writing is still as impressive as it was the first time I read The Scars Between Us two years ago, and while this re-released novel isn't one I'd consider at par with that introduction to her writing, Schiller clearly continues to have compelling stories to tell. I'm awarding Girl by Any Other Name four stars. ♥

Purchase Girl By Any Other Name on Amazon | Apple Books | B&N | Kobo.