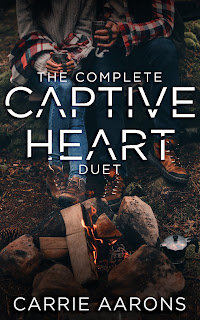 It's no wonder I've never been able to love anyone else. Tucker was all there ever was for me.

I was lost without him. And with him, only him, I'm found.

Me loving Carrie Aarons's books is nothing new, but I confess that The Complete Captive Heart Duet is a cut above the rest, and I'm not talking exclusively just among her book list. This was such a unique love story, one that may look like a "captive" romance, but it's so much more than that! She isn't sure if it was bad luck, a series of unfortunate events, or just fate, but when credit analyst Charlotte Morsey is abducted by a bank robber, she's at an absolute loss. The man who took her isn't some stranger--he's none other than Tucker Lynch, the boy she loved with all her heart and then went on to break it. She isn't quite sure how to reconcile the boy she's had feelings for since they were six to the twenty-five-year-old addict desperate enough to rob a bank at gunpoint. What sort of happy ending could there even possibly be to this seemingly guaranteed tragedy? Well, true love does find a way...

The duet is composed of two books, Lost and Found, with the former focusing on events during and after the robbery and the latter focusing on everything thereafter. There are flashbacks with regards to Charlotte and Tucker's shared past, giving readers a better idea of how their connection began, flourished somewhat, and then unceremoniously ended as teenagers. I'm going to be perfectly honest and admit that I liked the first book a smidgen more than I did the second one. There was a great deal of tension between them in Lost, almost taking on an enemies-to-lovers feel. There's still a fair amount of tension in Found, but a lot of felt more like passive-aggressiveness due to their years of separation. That's not to say book two isn't as good a read as book one, but there was more of a thrum of almost palpable anticipation during the whole kidnapping part of their relationship.

I think that the what stands out most about this duet is just how original it was. I love when an author is able to put together a wholly new and creative romance. Charlotte and Tucker's story has a great deal of angst, particularly when it comes the lack of good parenting and guidance these two had to endure. While Tucker is outwardly the more broken one between the two of them, Charlotte is just as lost as he is, stuck in neutral and going through the motions of a mundane life. The character development that they go through was inspiring, even as they falter from time to time. The duet also happens to have a great cast of supporting characters who become part of the support system that our couple leans on as their story plays out. Dare I say that The Complete Captive Heart Duet is Carrie Aarons at her best, and if you have never read anything of hers, this would be a great starting point. Five-plus stars. ♥