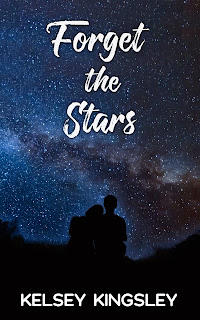 “Imagine that great big sky with only one star. How underwhelmin' it'd be,” he spoke, his voice low and gruff against my ear, and my breath scratched uneasily against my throat like sandpaper. “The stars aren't in competition, Molls. The sky is big enough for all of 'em, and every single one is needed to help each other shine and become a part of somethin' huge and beautiful. But,” he continued with a sigh, “if it made you feel any better, I'd dim the stars if I could. If it meant you'd feel that much brighter.”

I read Kelsey Kingsley's debut release, Holly Freakin' Hughes, back in August of 2017 and saw promise in the then-new author's writing even back then. Now, admittedly, I was never able to read anything she'd published since then...until now. Kingsley's writing has grown by leaps and bounds, the promise I saw before coming to fruition with the release of Forget the Stars. This book was a breath of fresh air in an otherwise overly saturated romance fiction trope. Yes, this was very much a friends-to-lovers romance, but with a touch of originality and a theme of reconciliation that rekindles the friendship between the main characters before sparking the something "more" between them, Kingsley hasn't just made sure she's given her readers a remarkable love story but she's ensured herself a spot on many an "author to watch" list. Oh, and have I mentioned that this has three companion novels?!

Forget the Stars is the story of childhood best friends Chad Wilcox and Molly Dyer whose friendship began even before they were born thanks to their mothers being the closest of friends themselves. But theirs was a friendship that fell to the wayside when they entered high school, the two drifting even further apart once they left for their respective colleges. Twelve years later, Chad has just turned thirty, and it looks as if he has it all: the dream job as a guitarist for a famous band, a hot girlfriend of eight years, and a financially secure future. But underneath it all that gleam and shine is a man still struggling with the pain that's saddled him since he was a child and one who may need to make a few changes. And then his path crosses with his former best friend, but the girl who once believed in making wishes isn't the same woman now before him. They could be friends again, but what if they want more?

There was so much to love about this book. Chad's health woes was of primary concern, and it does play a rather large role in the story since it affects Chad so intensely. I think the fact that the author chose a disease deemed by some as "gross" or not the sort of thing that a sufferer would readily admit was part of why I was so drawn to this story. I love that it was something different but I also appreciated that as much as Kelsey Kingsley showed that Crohn's Disease was manageable, she didn't sugarcoat the fact that it's something you live with for the rest of your life. I also adored the relationships that the main characters had with their respective sets of parents and with the rest of the band. Speaking of the band, now that I'm all curious, I shall definitely be checking out the companion novels involving Chad's band mates. I highly recommend Chad and Molly's story in Forget the Stars. Five-plus stars. ♥

Purchase Forget the Stars on Amazon.