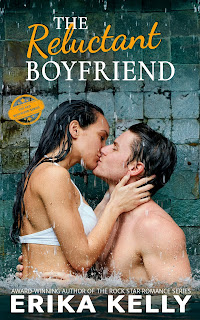 I can't believe we've reached the end of the Bad Boyfriend series! It's been fun getting to know each of the Bowie brothers and seeing them find love and happiness, and now here we are, with the lone single Bowie guy--Brodie. The Reluctant Boyfriend is a royal romance, and since Brodie isn't the one who happens to be royalty, I don't think it would be much of a spoiler when I say that he's paired up with a princess from the small European principality of St. Christophe. Rosalina Isabelle Anais Villeneuve is the eldest daughter and the hereditary princess of St. Christophe, and she should be in the midst of making wedding preparations, but she's far more taken with her work in her laboratory creating a new perfume for Nocturne, the family-owned perfumery. When she discovers that her fiancé has been unfaithful, she decides some time away is needed, so she jets off to Calamity, Wyoming. She's left her responsibilities to family and country behind for the summer--to live life simply as twenty-five-year-old Rosalina, not Her Serene Highness of St. Christophe. It's a time for fun and fantasies, not falling in love. But that was before she met and spent time with Brodie Bowie and his hometown of Calamity. He was a man who called her Rosie and saw her as a woman, but while princesses in fairy tales got happy endings, all she had was a summer.

This was a really sweet and highly enjoyable romance and one that wrapped up this great series rather nicely. Each brother's love story is different, and Brodie's has a royal twist to it. I was quite happy that there wasn't any sort of secret being kept about who Rosalina really was because that's something that's been done time and again. I loved how independent-minded Rosie was, how she had dreams of her own. The fact that she was her own woman but also someone who knew that she had a role to play and responsibilities to take on being part of the family that she was born into definitely made things very complicated for her. Of course, falling for Brodie brought in a whole slew of new complications and issues, but I love how their story reminds us that when love is at its truest and when we hold on to our dreams, they're worth fighting for. Another great thing about this book was seeing the rest of the Bowie clan and how everyone come together and living their own happily-ever-afters. I know that we haven't seen the last of Calamity since the author's already mentioned that a new book set there is an upcoming release, so I'm guessing it's a spin-off? Either way, I've got high hopes and expectations for it because Erika Kelly set the bar high after her Bad Boyfriend novels, and it's my favorite series from Kelly so far. 4.5 stars go to The Reluctant Boyfriend. ♥

The Reluctant Boyfriend (book four) - 4.5 stars - My Review (posted above)

Purchase The Reluctant Boyfriend on Amazon.