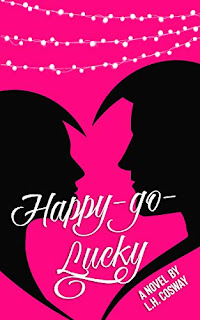 "I just don't want people thinking I went behind her back to steal you," I said, embarrassed.

His finger came to my chin, tilting my head up so that my eyes met his. His voice was low and husky, "You don't need to steal something you already have."

I made the mistake of starting this book in the wee hours of the morning, thinking that I'd get a chapter or two in before calling it a night and then finishing it later on. Yeah, that didn't work out the way I thought it would because the minute relentlessly cheerful Maisie Wilkins decided to sit beside relentlessly grump Cameron Grant during their office's Christmas party, there was no turning back for me. Nope, I needed to see where L.H. Cosway would take their story, and boy, oh boy, she took them on an unexpected but oh-so-extraordinary journey, and I consider myself rather privileged to have been invited along for the ride. And just a quick FYI: the first two parts of this book were serialized in Cosway's reader newsletter in two parts--Once Upon an Office Party and Happy-Go-Lucky--but this full-length novel includes new material and has gone through editing. So, whether you've read Cameron and Maisie's story via the newsletter or are new to it, you won't regret picking up this lovely romance and mystery tale.

Maisie Wilkins and Cameron Grant have worked together at James & Peterson Investigations for several years, each one earning a reputation for themselves. She's the primary researcher who voluntarily brings everyone donuts each day and is known for the ever-present smile and helpful nature, and he's the no-nonsense head investigator who has no time to mingle with anyone in the office and keeps everyone at a distance. When Maisie sees him sitting by his lonesome during the office's Christmas party, sitting at him table was her way of being nice, and Cameron doesn't hesitate to tell her that she's TOO nice with everyone. But as the party continues, the two become more comfortable with one another, and several drinks later, the woman nicknamed by her parents as Happy-Go-Lucky gets lucky, spending the night with him. How do they stay professional, especially once Maisie is promoted to investigator and with Cameron wanting to get more personal and Maisie needing to be a bit naughty?

Happy-Go-Lucky is one of those novels that turn out to be even more than you had hoped it would be. There were parts of Maisie I could absolutely relate to, and then there were things about Cameron that I totally saw in myself as well. I loved getting to know these two and their romance had me smiling in a rather goofy manner more than once. Because of the nature of their jobs, this story also happens to have an element of mystery and suspense, and I was so on board for that, what with me being a fan of stories that have me wondering what's happened, why it happened, and who could be behind it all. This book also has a much lighter feel to it compared to my previous L.H. Cosway reads, which I think showcases just how capable she is of switching gears and we, her readers, are the ones who get to reap the rewards. I'm seriously recommending that you give Cameron and Maisie's story a whirl, and I've got all of my fingers and toes crossed that you'll adore this LOVELY couple as much as I do. Five-plus stars! ♥