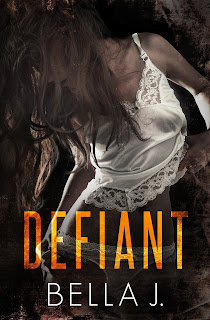 Defiant is the second novel in Bella J.'s American Street Kings series, but it MUST be read ONLY AFTER Depraved, which is the series starter. This new book picks up where the last one left off, with Alyx Greene, daughter of the police commissioner and willing captive of the Granite, aka Lincoln Walker, president of the American Street Kings MC. The harsh realities of life within the club are beginning to get to Alyx, and after everything that's happened, she's at a complete loss, especially when it comes to her feelings for the man who's consumed her body and soul. The war between rival clubs needs Granite's attention and focus, but Alyx has proven to be a distraction he doesn't need but refuses to be rid of. Going up against the Pythons is dangerous, but now, Alyx is caught in the crosshairs. If she thought there was a prince hidden behind the beast, she's about to learn that fairy tales do not exist for her.

Bella J. definitely didn't disappoint with this second American Street Kings installment, and it's just as gritty and intriguing as the first one. I liked seeing Alyx having a stronger backbone here, and while what led to her opening her eyes to the new world that now surrounds--and entraps--her was heartbreaking, it was as if she had to learn the harsh lesson in order to grow up a bit. Granite is still harsh and every bit a domineering man, however, it's his conflicting feelings for Alyx and the club that he needs to come to terms with. After all, he has his responsibilities as the president of the MC, but now, he realizes that he has his commitment to Alyx, even if it doesn't seem as if what they share requires such a thing. Now, while the first book may have ended in a cliffhanger, we do get a resolution with Alyx and Granite's relationship here, and the series continues on with other stories. I'm excited to see where this author takes her cast of characters--and the world she's created--next. I'm giving Defiant 4.5 stars. ♥

Read my reviews for the American Street Kings series: