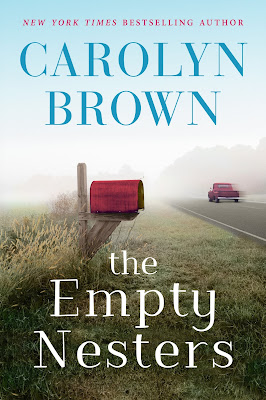 About The Empty Nesters
Dear friends and army wives Diana, Carmen, and Joanie have been through war, rumors of war, marital problems, motherhood, fears, joy, and heartache. But none of the women are prepared when their daughters decide to enlist in the army together. Facing an empty nest won’t be easy. Especially for Carmen. With emotions already high, she suffers an even greater blow: divorce papers. Diana understands the fury and tears. She’s been there.

With nothing to lose and no one at home, the girlfriends impulsively accept an unexpected offer from their elderly neighbor. The recently widowed Tootsie has an RV, a handsome nephew at the wheel, and an aim for tiny Scrap, Texas, to embrace memories of her late husband. Still grieving, she can use the company as a balm for her broken heart. So can the empty nesters.

Embarking on a journey of hope, romance, and healing, Diana, Carmen, and Joanie are at a turning point in their lives. And with the open road ahead of them, it’s just the beginning.

Add The Empty Nesters on Goodreads.

A Guest Post from Carolyn Brown
Jump Into Author Carolyn Brown’s Empty Nest
Good morning, and thank you for inviting me to stop by to talk about my new book, The Empty Nesters. I’ll be giving all y’all a few of my favorite scenes and a little commentary during the time we get to spend together.

As Ma used to say on Golden Girls, imagine this—Carmen, Joanie and Diana have just dropped their daughters off at the recruiter’s office. They’ve managed to keep the tears at bay and put up a brave front, but now it’s time to let the tears loose.

“For the first time ever, Natalie and I won’t decorate the house for Halloween together. Nine months of carrying them, then we basically raised them on our own while our husbands were deployed or got sent someplace to train other officers. And now they’re gone, and we won’t see them for Halloween or Thanksgiving. And who even knows about Christmas? It’s not fair.”

It’s always amazing what comes to mind during a sad time, isn’t it? Things pop into our heads that seem trivial in the face of the event, and yet, at the time, the good memories are what keep us sane.

Tootsie, their elderly neighbor, has just lost her husband, after they’d bought the huge RV and planned a trip to northeast Texas. She’s trying to convince the women that they need to get away from their empty nest for a while.

“You need to get away for a little while and get some perspective,” Tootsie said.

“Let’s pool our money and blow it all on a trip to Paris. We can shop and have lattes in little bistros,” Diana suggested.

Joanie sighed. “That’s a pipe dream. We probably don’t have enough money to even get to Paris, Texas, between the three of us.”

The three of them have known the support of each other through the past thirteen years, and just because they’re now alone in their homes, they have no doubt that the love is still there between them—and that it’s even stronger than blood sisters.

“We’re only half a block and a phone call away. If any of us feel the world dropping out from under our feet, we can get back together in less than five minutes.”

I was amazed at how supportive all of them, including Tootsie, were of each other. They might disagree, but Lord help the person that tried to come between them, or who had the nerve to say an ugly word about one of them.

Everything happens for a reason and in the time that it should happen. I believe that with my whole heart. Diana had gotten her divorce years before the book opens, but she remembers the pain and anger of it all. Then she focused all her energy and time on raising her daughter. But now it’s her time to find a new love, and a new life—maybe with a younger man.

“That many trips into town on those roads would shake the hell out of their Caddy. And believe me, Aunt Tootsie treats that car like family.” Luke chuckled. “Age, on a truck or on a person, makes no difference. It’s how well they’re maintained that matters.”

Why, oh, why, couldn’t he have smooth pickup lines like other men? Luke asked himself. What he’d just said could be taken as an insult. She might think that he thought she looked like an old pickup truck at her age, when in reality she was downright gorgeous. He wouldn’t be a bit surprised if she still got carded at bars when she ordered a drink.

Thank you again, for inviting me into your world, and letting me talk about the amazing ladies (and Luke of course), from The Empty Nesters. Happy reading to each and every one of you!

She and her husband live in the small town of Davis, Oklahoma, where everyone knows everyone else, knows what they are doing and when . . . and reads the local newspaper every Wednesday to see who got caught. They have three grown children and enough grandchildren to keep them young.