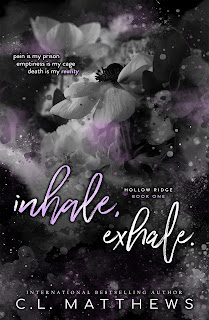 Oh, the angst! If you have as much of an addiction to angst as I do, then look no further because C.L. Matthews's opening salvo in her Hollow Ridge series because Inhale, Exhale meets my angst quota and then some, with the "some" being truly beautiful writing backing a hauntingly heartrending story of love and loss and knowing when to let go and hold on. Is it a flawless read? No, but it certainly isn't lacking in giving all the feels. I'd never read anything by Matthews prior to this new novel of hers, but if her previous novels are at par with this one, then it would be safe to assume that I've been missing out, a sad fact that I hope to remedy as soon as humanly possible.

When Lauren Tanner said "I do" to Jason Collins, she took her vows to heart. They would spend the rest of their lives creating a family and a home. Their happily-ever-after seemed to be the thing fairy tales spoke of. They were living the dream...until it all became a nightmare. And then while dealing with immeasurable loss twice over, Lauren and Jason--Lo and Jase--lost their way. Vows have been broken, their family no longer as united as before. Lo is barely hanging on to what they once had, but Jase is farther away from her than she ever believed possible. Amidst all the anger and hurt and betrayal may lie a glimmer of hope, but will the bleakness blot it out in the end?

I'm just going to put this out there because I know that it's a hard limit for some romance readers: there are instances of cheating in this story. There's never a good enough reason or excuse to cheat, so I'm not defending the actions of the main characters in this book. What I will say, however, is that there's more to this book than cheating. There is an honest-to-goodness love story, but it doesn't stop at the expected happy ending. There is so much more story to tell and we get it here--the good, the bad, and the ugly--but then, nothing about cheating is supposed to be beautiful or charming. This was about a marriage, the struggles, and the choices that were made.

Was I fan of any of the main characters? Not really, especially the male main character. Sorry, but blaming the failure of your marriage on your grieving--twice over--wife and using that as your jump-off point for cheating on her is inexcusable. He nearly killed this book for me, but I held on. No one in this book is perfect--far from it, actually--and I did feel that not everything was as fully resolved as I would have liked, but this is only the first in a series, so I'm going to hold off on my ultimate judgment to see how it all plays out as Hollow Ridge proceeds forward. So, all things considered and weighed out, I'm handing Inhale, Exhale 3.5 stars out of a possible five stars. ♥