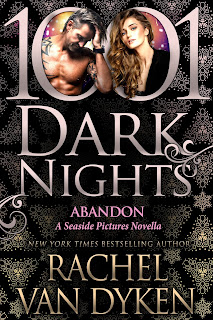 Even though I have yet to read all the books--full-length novels and shorter-read novellas, having only read a couple or so--in Rachel Van Dyken's Seaside book universe, I was still able to fully immerse myself in the second-chance slash hate-love story in Abandon, the latest release in said series. Published by the same team behind the 1001 Dark Nights collections, Van Dyken returns to the quaint Oregon town of Seaside, although in the case of thirty-three-year-old Ty Cuban, he wishes he were anywhere but Seaside. Unfortunately, he doesn't really have much say in the matter, not after the fiasco that went down during the last Grammys, giving his three Adrenaline band mates carte blanche as to how to handle things post-clusterfuck. So now, Ty is stuck at Seaside's Hollywood Music Camp for two months, and as if things couldn't possibly get more miserable for him, he finds out who the other "volunteer" is--the woman he hates most, aka the girl he loved and was ready to marry...until she abandoned him ten years ago. He may have once made beautiful music with thirty-one-year-old Von Abigail and she may have owned his heart a decade ago, but he'd be stupid giving her what's left of it this time around. Right?

Okay, I think I'm seriously going to need to read the rest of the Seaside and Seaside Pictures series because inasmuch as I absolutely loved Ty and Abby's love story, I'm totally curious about all the other couples whose stories I've yet to read, especially if they're all as addictive as the romance the author gives us in the newest installment to the series. This book had some major angst, and it isn't solely due to all the hate-love vibes coming from the main characters. Ty's back story is rather heartrending as well, and learning what he went through growing up makes it easy to see why he spiraled the way he did after Abby broke things off with him ten years prior. We do have flashbacks to give us a better idea as to the heartbreak these two experienced and what led to the actual break-up. In hindsight, maybe the two of them going their separate ways was for the best because they did have to go through some growing up and maturing, especially with the insecurities that were haunting them, no thanks to their pasts. And with as strong a support system as they had when it came to their tight-knit--and nosy--circle of friends, my hopes were always high for these two. I need Drew's book next! Five stars for Abandon. ♥