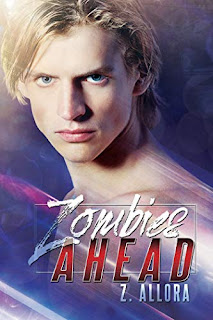 Zombies Ahead is the first in Z. Allora's Club Zombie series and it's my first read from this author. Club Zombie is a rather large privately owned property located in South Carolina, USA that serves as a place of refuge for individuals who are in the process of transitioning from regular ol' humans to zombies as well as zombies who have yet to find their mates. The newest zombie-in-transition is soon-to-be nineteen-year-old Kai Bauer from Germany, whisked away by two American strangers who don't give him a whole lot of explanation as to why he's leaving his beloved cousin and wretched uncle behind. Once in Club Zombie, however, Kai is introduced to Jasper (whose last name wasn't mentioned, unless I missed it), a former priest also from Germany, who becomes his guide as he tries to learn all things zombies. There's a connection between the two, but with Jasper being wary since he's been hoping to find his mate for decades to no avail and with Kai telling everyone he's straight even as he has not-so-platonic thoughts about Jasper, it may take some time and fate for them to finally figure that they belong together forever.

I felt that this was a good beginning to the series, and since I never got to read the original edition of this book, I have no clue if any changes were made to it. Kai is pretty much a clueless teenager thrown into a whole new world with Jasper and several other zombies--whom I suspect will be getting their own stories told as the series moves forward--as his sources of information. Along with trying to understand that he's actually a zombie and what that all entails, Kai also has to deal with his confusing sexuality because even as the "clues" point to him being gay, as far as he's concerned, he's straight. I liked the connection that Kai and Jasper shared, although theirs was more of a slow-burn romance even as a number of the others had no qualms engaging in public displays of sex and affection. Both main characters are easy to like, and then there are a couple of supporting characters who've already captured my attention--i.e. Ulrich (Kai's sixteen-year-old cousin with the zombie gene), Cassidy (a zombie who appears to be gender fluid), and Alex (a shy zombie). Zombies Ahead garners four stars and I look forward to more. ♥

Purchase Zombies Ahead on Amazon.