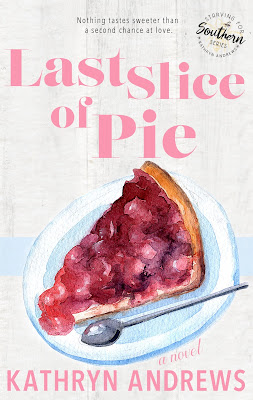 Pies, fillings, jams, jellies, honey, they’re all a part of my award-winning business, Firefly Kitchen. After being left behind, by everyone, I was determined to make it all on my own, and I have. I love what I do, I love what I’ve created, and I love who I’ve become. Yes, it’s small, but it’s mine, and nothing or no one can stop me now. Not even Bryan Brennen. He may have returned, but it won’t be long before he leaves. And regardless of which way you slice it, some things can’t be forgotten, no matter how sweet the taste.

I’ve spent more years than I can remember chasing my dream. When you come from nothing, it’s even more important to become something. The unstoppable drive and incomparable determination that is ingrained in me has gotten me to where I am now; twenty-eight years old and undoubtedly the best professional quarterback in the league. To be happy is to be perfect. Plans, plays, passes, I’ve mastered them all, but it was never just for me, it was for her, too. Only she doesn’t know it, and now, ten years later, I’m ready to tell her.

Off the field and out of the kitchen, will they break and crumble, or finally get their second chance at the biggest game of them all . . . love. 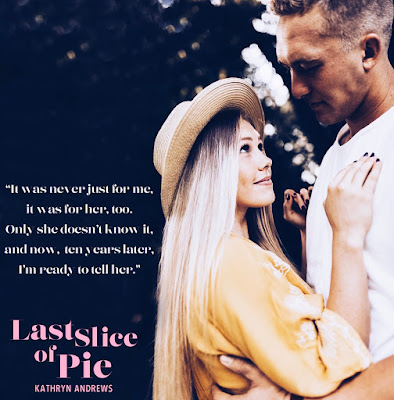 Read my five-starred review of Last Slice of Pie. 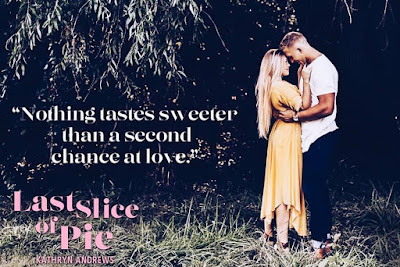 An Excerpt from Last Slice of Pie
Bryan
“How long has it been?” Jack asks as he walks up into our conversation. There’s a fork sticking out of his mouth, and I can’t help but roll my eyes. You would think after how much pie he shoved down his throat yesterday he’d be in sugar shock, but nope, he’s back at it again today.

Catching my expression, he grins. “What? I can’t help that it’s all so good.” His eyes widen as he spots the two new boxes, and he tips his head. “What kind are those?”

I pick up the boxes and hand them to him. One says grasshopper pie, and the other says cherry.

“Yes! Can I take these home?” he asks, his voice so hopeful.

“Sure, and it’s been a while since I’ve been back—years, in fact,” I answer as I look at Jack. I’m certain my frown relays that it’s been more than just a few years, but only I know that the true answer is never. I’ve never gone back home.

He tucks the boxes under his arm, the sleeve of his clean shirt bunching up. He’s already showered and ready to go.

“I understand.” He nods and then breaks eye contact. “I don’t really have any one place I call home, so I haven’t been anywhere in years either. We moved around a lot with my father’s career, and now they’re retired in Scottsdale. I love the water way too much to think about staying there long-term.”

I agree. I love the water, too, which is why many people were surprised when I bought my house on the river instead of downtown or on the island with my other teammates. The minute I walked out the back door, which faces northwest, I knew it was the one for me. Yes, the river cuts through the city, but the view across from me is undeveloped, wooded, and it makes me feel like I’m not in the city. It’s perfect.

“What time is the ceremony? Want me to go with you?” Reid asks. I should have known he would offer. He’s loyal and a true friend like that. Not many would give up their day off to drive two hours in the car, stand in the heat, and then drive two hours back.

“It’s at ten, and thanks, but no thanks. I might make a few stops while I’m there.”

Not a few stops, just one, maybe, but I don’t tell them that.

Tossing my cleats and helmet into my locker and my dirty clothes into my bag, I grab a towel, wrap it around my waist, and turn to find both Reid and Jack staring at me. It’s like they know tomorrow is more of a big deal than I’m letting on, so I slip into my role as a leader and try to assuage their concerns.

“Don’t worry, boys.” I smile real big and see both of them shift away from the uncertain tension that had set in between them. I throw out my arms and begin walking backward toward the showers. “I’ll be back and on the plane for our game this weekend first thing the following morning.”

If only it were that simple. 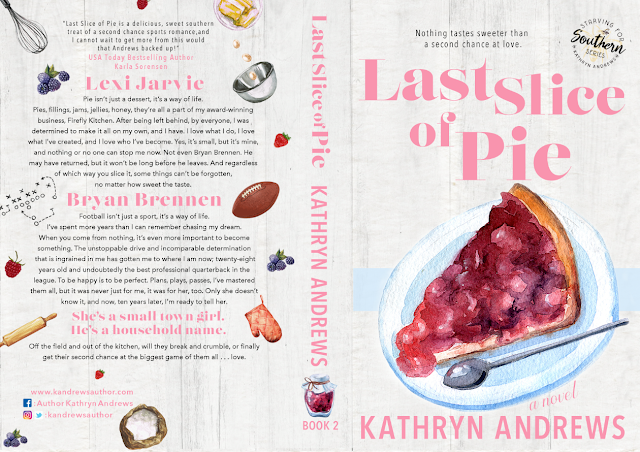 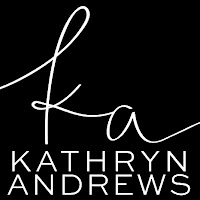 Kathryn Andrews loves stories that end with a happily ever after. She started writing at age seven and never stopped. Kathryn is an Amazon bestseller for her much-loved Hale Brothers series and is a chi-lit, contemporary romance, and new adult writer.

Kathryn graduated from the University of South Florida with degrees in Biology and Chemistry, and currently lives in Tampa, Florida. She spends her days as a sales director for a medical device company and her nights lost in her love of fictional characters.

When Kathryn is not crafting beautiful worlds that incorporate some of her most favorite real life places, she can be found hanging out with her husband and two young sons, while drinking iced coffee and enjoying the sun. To find out more about Kathryn and her novels, visit www.kandrewsauthor.com.