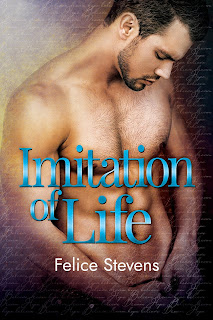 Imitation of Life is the second novel in the Rock Bottom series from Felice Stevens, but it can pretty much be read as a standalone since it's about a completely separate couple, although the couple from the series starter, Broken Silence, and several other characters from the author's previous titles make numerous appearances here. This book is about Benny DeMarco and Gino Acosta, two guys who met and became fast friends a couple of years ago and work together at Hard Core, a gym owned by Jeremy Strauss (whose story can be read in Perfect, the third Soulmates novel). Benny has been crushing on Gino from the get-go, but while Gino flirts and hooks up with any man who catches his fancy, he's never even attempted to do so with Benny. Maybe his friends are right and it's time for Benny to turn his attention towards someone he can actually have a romantic relationship with. After all, what's important is to be the supportive friend that Gino needs as his modeling career starts to rise. But what neither of them realize, is that the best thing to ever happen to them's been right there in front of them all along.

Felice Stevens delivers on the angst with her newest book, but it was also peppered with some lighthearted moments, so this was definitely not an overly depressing read. Benny and Gino do have a good friendship, although it became clear to me that these two didn't really know each other as well as they may have thought they did. What they saw was what the other one projected, with both of them not fully realizing that there was a lot of pain that they were hiding. My heart went out to both of them. Benny didn't see himself as someone who was good enough, going unnoticed, which is why he thought Gino seemed to want to be with everyone except him. Then there was Gino who was made to feel less than worthy, with only his looks being given any importance by a lot of people. I loved the story itself, although it did feel drawn-out at times, slowing down the pace. I felt for both main characters, though I confess I may have liked Benny more than Gino just a smidgen. Of course, the surprise appearances of other characters from Stevens's books was a bonus. Overall, Imitation of Life was a four-star read. ♥

Purchase Imitation of Life on Amazon.