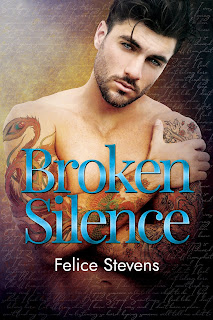 Felice Stevens has got a new series and if the rest of Rock Bottom is as good as the first book, then this could very well become my favorite collection of books from the author! Broken Silence is the series starter and it employs the professor-student romance trope with a touch of May-December to it. We're introduced to twenty-five-year-old Justin Molina, a senior in college who spent a year in jail for a crime that was meant to help his then-ailing father, and forty-two-year-old Foster F. Harding, a university professor teaching Introduction to Poetry Writing and a soon-to-be divorced man. On paper, neither man may have a great deal in common but when their paths cross in Foster's classroom, the power of poetry and an unexpected attraction like any other has them becoming entangled in what could well be an illicit affair that may possibly threaten Foster's tenure and further sully Justin's reputation.

I do love me my slow-burn romances because I feel like I get to know the main characters at the same time that they get to know each other better. The connection isn't merely established but it's cemented and strengthened as the story moves forward. Yes, the connection is present but it isn't merely a given. The characters work for that happily-ever-after, and as far as I'm concerned, it feels more rewarding that way. Of course, there's slow and sweet (and steamy!) and there's slow like a snail crossing a main thoroughfare, and if anyone has mastered the former, it's none other than Felice Stevens, who also happens to add the perfect amount of angst to make me quite happy.

Like my Dad tells me often, it's the stuff that you need to work for that you end up appreciating more, and certainly, Justin and Foster worked towards that happy ending of theirs. They had their issues and insecurities, what with Justin being in jail for burglary and feeling as if he wasn't there when his parents needed him most and Foster believing he wasn't enough for his ex-wife who never seemed to be satisfied with the man she married. Then there was the difference in their ages and their social status, but given time in general and time getting to know each other--plus a bit of subtle and not-so-subtle nudging from their friends and family--these two proved they deserved their HEA. Broken Silence delivers a five-star read, and I can't wait for the next Rock Bottom release. ♥