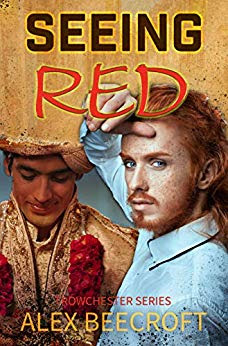 Victor is a bad man. Is there anything he won’t do for power and money?

Destroy a local business so he can buy it cheap? Kick out its owners and turn it into a cash cow? He relishes the chance.

Idris is a good man in possession of a renowned tea-house. He’s put his heart and soul into the place. It’s everything he has and wants...

He wants Victor too.

Can the love of a compassionate man soften a predator’s heart before it’s too late? Or is Idris doomed to lose his life’s work, and his heart with it?

A contemporary mm romance, Seeing Red is the long-awaited new installment of the critically acclaimed Trowchester series. Each book in the series is a standalone, and can be read in any order. Feel free to start here and work back!

An Excerpt from Seeing Red
“You were brought up poor?” Idris’s inner voice was now more of a clench of pity and anger in his gut. “And you see yourself in these dogs?” Stray dogs, un-fed, unwanted, dogs that were being taken out to be drowned. “I won’t ask you the story behind that,” Idris put out an arm and pulled the man closer to him, relishing the way Victor melted into him, letting his meagre weight rest against Idris’s sturdier frame. “But I want to remind you that not only you but also I fell in love with these dogs the moment we saw them. Those who mistreated them before... not everyone is like that.”

“They are, though.” Victor’s head came slowly down to rest on Idris’s shoulder, tentatively. His cynical words made even that little gesture of trust seem enormous, more than Idris deserved. “It’s kill or be killed out there, and I’m not... I’m not going to be killed.”

Of course, he had fought off two men only a couple of hours ago—bigger men than himself. That must have taken some courage, and he was probably now exhausted from the adrenaline crash. With that and whiskey on top of it, he was confessing private insecurities to a man he had only just met.

As much as Idris would have liked to carry on supporting all his weight, hearing his murmured confessions, and perhaps sliding his fingers into that drying hair and stealing a kiss or two, he realized that this was absolutely not the time.

They had done a good thing here. Idris would not sully it by continuing to make a pass at a man who was more vulnerable than usual, whose judgment might be impaired, and who might therefore regret it in the morning.

“Let me get you to bed,” he said, and then hurriedly, realizing it could be misinterpreted, “you need to sleep. In the morning, I’ll convene an emergency book-club meeting and we can meet up again then. All right? I think you’re too tired for anything else.”

“Out of the habit,” Victor raised his head slightly and smiled fuzzily.

“Fighting, ‘cept—except with words. I guess I am tired.”

I was born in Northern Ireland during the Troubles and grew up in the wild countryside of the English Peak District. I studied English and Philosophy before accepting employment with the Crown Court where I worked for a number of years. Now a full time author, I live with my husband and two children in a little village near Cambridge and try to avoid being mistaken for a tourist.

Asexual, agender and mother of a transgender son, I still feel like my place in the LGBT community is perhaps peripheral. But it’s very important to me nevertheless.

I’m only intermittently present in the real world. I have led a Saxon shield wall into battle, I can be found most weekends practicing an eight hundred year old form of English folk dance, and recently I’ve been getting into Steampunk, with a character who’s a cross between Evie from The Mummy and Indiana Jones.

I write queer romance – that is, my main characters are typically gay, bisexual, transgender, pansexual or asexual men. Best known for historicals, I also write Fantasy/SF and contemporary romance, all of which tends to be on the sweeter side of the heat spectrum.