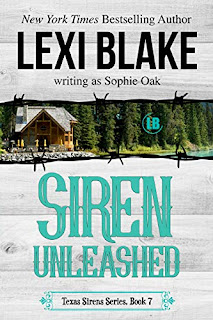 I loved how this book not only gave readers the story of Nat, Ben, and Chase, but also provided more insight into a number of supporting characters who I am now even more curious about and whose own books I'm itching to get my hands on. As always, there was romance, sex, and suspense, and Lexi Blake never fails to titillate readers with the scorching heat between her main characters, but it's never just about the sex either. There's a whole lot of story that goes on and I admired Nat's courage to make the most of her life post-kidnapping, torture, and false imprisonment. She definitely had that connection with the twins, although each brother shared a unique one with Nat. The suspense brought in the thrills and I very much enjoyed the book from cover to cover. Lexi Blake writing as Sophie Oak has become my go-to when it comes to menages, not only because of the quality of the writing but because it's not merely about the sex or the lifestyle with her characters. There's emotional healing and the realization that sometimes, love isn't something limited to "only" two people. I'm giving Siren Unleashed five stars. ♥