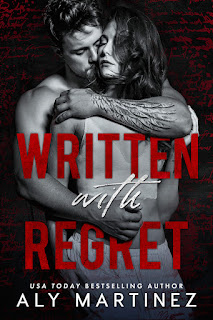 Aly Martinez never disappoints and while I may not have been absolutely taken with the female main character in her newest release, the male main character, along with the rest of the cast, and the story itself had me hook, line, and sinker. Martinez starts off her new duet, Regret, with the very angsty Written with Regret, and while I may not be giving away too many details in my review, let me just say that she threw in one hell of a twist with that cliffhanger of an ending of hers. There was shock and awe, and yes, I'll admit it, a whole lot of frustration, but the good kind because I was so into the story of Caven Hunt and Hadley Banks and a little girl named Rosalee, who is Caven's pride and joy and the love of his life. If there is one thing that I can definitely say, it's that not everything is what it may seem in this story and with these characters, and I'll leave it at that. Seriously, just read the book now!

I've read majority of this author's books, and the ones I have yet to read--the Wrecked and Ruined box set--I already have in my tablet and one title I won't be able to read since it's no longer available for purchase. I know how well Aly Martinez creates the stories her fans and readers devour, and Written with Regret is further proof of that. I love that I didn't see the ultimate twist coming, that I was left as gobsmacked as I was, not because there was a twist but because of what the damn twist was and that I couldn't get the answers I desperately needed because the second book isn't out yet. I'm already counting the days and weeks, and I know that June 13th will be here before I know, but you'll get why I am as anxious as I am when you finally read this five-starred series starter! ♥

The waiting game is on, with the release of book two slated

Purchase Written with Regret on Amazon.