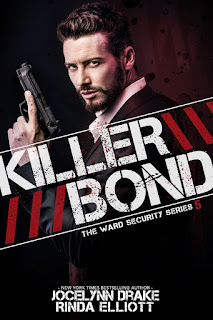 “I didn't expect to find anything like this with my life the way it is.”

Jocelynn Drake and Rinda Elliott are one of my favorite go-to author duos and there's a reason for that. All you have to do is crack open one of their books and it's like diving in to a story filled with intrigue and suspense balanced perfectly with the amount of romance and sex. And let's not forget their cast of characters because hello, I can never get enough of the enigmatic and awesome men that they have lined up in their series, just like the ones in their Ward Security series and the original series it was spun off of, Unbreakable Bonds. With the release of Killer Bond, the fifth full-length novel in Ward Security, Drake and Elliott have simply reiterated through their writing what I already know through my reading experiences with their books: that I'm in for one hell of a fantastic ride!

When Daniel Hendricks decides to take some time off from his job at Ward Security as an accountant, all he wanted was a whole week to relax and enjoy the sand and surf of Bermuda. He certainly didn't expect to catch the eye of the gorgeous guy who lays down in the lounge chair next to him. Maybe a fling during his vacation wouldn't be such a bad idea, but that was before Daniel gets caught up in a whole lot of espionage and killing, all thanks to Edward Raines, the same hot stranger who turns out to be a CIA agent. In Edward's defense, Daniel looked eerily like his target's doppelganger, but he never planned for the whole mistaken identity brouhaha or for the chemistry between them to be as palpable as it is. But Daniel is nothing more than a mere pawn--a means to an end for Edward until he's able to get all the information he needs in order to end this extremely dangerous mission. Right?

Romance readers know all about the importance of the "meet-cute" but Daniel and Edward's is on a whole new level. Seriously, the whole mistaken identity thing on Edward's end leading to Daniel getting sucked into the chase for the rest of the bad guys was prime pickings for a story as action-packed as this one. Daniel and Edward had that much-needed believable connection, and I loved it when these two tried desperately to ignore it because of the situation they were caught up in. I'm a sucker for well-written tension--sexual and otherwise--because it builds anticipation between the characters and for the reader, and Jocelyn Drake and Rinda Elliott are masters at their craft. This is why they've got the following that they do and why readers can't wait to get their hands on new releases. Naturally, the rest of the guys from Ward Security make appearances, and as much as I love that, I also love that this was wholly Daniel and Edward's story to be told, although a certain porn star did come close to stealing the show. (Okay, not the entire show, but now he's got me curious.) Killer Bond easily snags five-plus stars. ♥