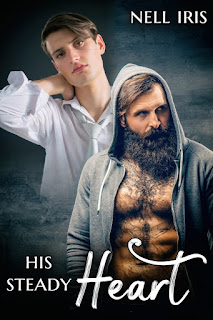 Awww! I so needed something light and sweet this weekend and I got exactly that with Nell Iris's latest standalone release, His Steady Heart. This was one of those cases where you shouldn't judge a book by its cover because while it has a rather gloomy and somewhat disjointed look to it, the story between the covers is worth cracking the book open. It's a May-December, slow-burn romance between Ashley Buchanan and Pippin Olander. To everyone else, he may be known as "Buck" but Pip prefers calling him by his given name. Pip has done a lot of growing up since he was that little boy at six years old sitting on his front stoop, but Ashley is still the same man he was at twenty-two--protective and wanting to care for those around him, and that includes Pippin. They've been in each other's lives for fifteen years, and Ashley is now the lone person in Pippin's life who has been a constant. When their friendship begins to feel like more, will the sixteen-year age difference and Pip's interfering yet irresponsible mother and Ashley's cheating ex get in the way of a happy ending? Will Pippin's pride and Ashley's need to care for him clash?

This story had just enough angst to satisfy me and had a whole lot of touching moments between the characters. Inasmuch as Ashley and Pippin had already been in each other's lives for a decade and a half, I appreciated that there was no rushing into romance or sex for these two. It was clear from the get-go that they cared about each other, but there wasn't any of the usual perving you'd expect to find. They were honest-to-goodness friends on the same level, more or less, meaning this wasn't a case of Ashley needing to play "Daddy" to Pippin or the younger man wanting someone to be the missing father figure in his life. They're both independent men who happen to enjoy each other's company and find solace with one another. There's a smattering of supporting characters but this truly was Ashley and Pippin's story to tell and I played out much to my satisfaction. There are times where I don't need the overly detailed sex scenes or the grand gestures and the like. His Steady Heart had a simplicity to it that I craved after the barage of complex and heavy reads that've crossed my tablet. Well done, Nell Iris! 4.5 stars. ♥