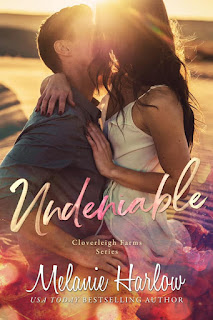 Two people with a whole lot of history filled with happy and hapless moments and even a couple of heartbreaking ones in between are about to find themselves in constant and close company in Undeniable, Melanie Harlow's second novel in the Cloverleigh Farms series. Chloe Sawyer and Oliver Pemberton have known each other all their lives, having been born only a couple of days apart thirty-two years ago. Their mothers are best friends and their families are closely knit, but while they may have started off as friends, Chloe and Oliver sure didn't stay in the friend zone as they got older. Nope, these two were experts at pushing each other's buttons, with teasing and taunting, wagers and dares, and fun bantering turning into fiery bickering. However, it was one particular event in Chicago that created a wedge between them that lasted for several years. Time and time again, Chloe reminds herself to stay as far away from Oliver as possible, and this time around, she's been able to stick to it, but when an opportunity is brought to the table that benefits both of them, will Chloe walk away or risk her dream...and heart?

For the record, it's a rarity for me to rate any of the Melanie Harlow-penned books I've read lower than five stars mainly because I adore them to pieces--save for one time last year, and that had a lot to do with my not connecting with the female main character. Well, in the case of Undeniable, I struggled quite a bit to like the male main character and even found myself shaking my head at his female counterpart. I loved Chloe and Oliver's frenemies-to-lovers story that had an nth-chance feel to it, and as always, the family angle was a winner. Here's the thing, though: Oliver made it difficult to like him. He had a bad habit of manipulating a situation in order to benefit from it, usually resorting to stretching the truth or hiding pertinent information. Also, while he may have had some affection for Chloe through the years, he couldn't seem to help sabotaging whatever progress he made in terms of moving their relationship from friends to more because once they've taken a step forward, he does or says something that has them taking a leap back. Chloe isn't blameless, either, since she had a habit of taking him back.

While I may not have been a fan of Oliver's, I did happen to like Chloe. Yes, she was somewhat easily persuaded when it came to him and it was like she never really learned her lesson--the whole "fool me once, shame on you, fool me twice, shame on me" popped in my head a number of times whenever these two had their issues growing up--I did love her drive and ambition. She was a loving daughter and sister and she also happened to be a woman who saw greater things for the family business and wouldn't let something like her issues with Oliver get in the way. And for the record, Oliver did redeem himself and I did end up liking the guy enough for me to feel he was worthy of Chloe's heart, although he was cutting it really close there. As always, Melanie Harlow knows how to put together all the usual elements of a romance novel while also adding her own touch to it--that great balance of heat and heart and doses of wit and angst. So, while Undeniable may "only" be getting four stars, I definitely enjoyed the tale that Chloe and Oliver had to tell, and I look forward to reading the third Cloverleigh Farms novel. ♥