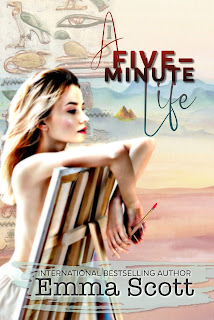 “You gave my life back to me. Everything I have is because of you.”

“I can say the same, Thea. You gave me my life back when I'd stopped living it.”


Oh my heart. Every time I think Emma Scott can't possibly outdo the book she's just published, she does exactly that with her next release, and I'm saying that without even having read all her books yet. Her newest standalone, A Five-Minute Life, is one of those stories that made me pause and seriously contemplate what I would do if I were in the female main character's shoes and conversely, in the male main character's. This novel is both thoughtful and thought-provoking, as well as heartrending and hopeful, and ultimately, it is very extraordinarily awe-inspiring.

When twenty-four-year-old James Whelan starts his new job as an olderly at Blue Ridge Sanitarium, he expects nothing more than to keep his head down and do whatever's asked of him. But that was before he met twenty-three-year-old Althea Hughes. At first glance, she doesn't look like she belongs with the other residents, but five minutes into a conversation with her, and Jim sees why Thea has been there for two years. He refuses to believe that there's no hope for this beautiful girl with a whole life left to lead, but what could a guy with a stutter ever do?

Jim and Thea's love story is a reminder that, more often than not, all we need is one person to champion our cause--to believe that there is hope when everything seems utterly impossible. Thea's memories consist of five-minute snippets that get wiped clean every time her brain resets. That's what everyone sees and that's what everyone believes. It takes Jim's presence in her life and his attentiveness to take note of the seemingly routine and his persistence that others look more closely at Thea's case which becomes a turning point for both their lives.

There's such an innocence to Jim and Thea's romance that called to me, but at the same time, the seriousness of what they had both experienced and endured in their pasts--pasts which bled into their present time and again--reminds us that these two are survivors. I admired Jim's perseverance and his dedication to the cause that was Thea, but she wasn't merely some pet project for him. She became his purpose and a reminder that there was more to life than whatever routine and schedule Jim had gotten used to. They became one another's touchstone.

With a treasure trove of supporting characters and a moving story of love and hope, this novel was both character- and plot-driven. Emma Scott doesn't shy away from the harsh realities that her characters are forced to face--harsh realities that we can either empathize with or recognize in our own lives--but then they get back up and move forward, doing so amidst the struggles and hurdles because at the end, it'll be worth it. A Five-Minute Life may not be a five-minute read, but it's one that'll stay with you for far longer. This is one of the year's best. Five-plus stars. ♥

Purchase A Five-Minute Life on Amazon.