Review: Choose Me by RC Boldt 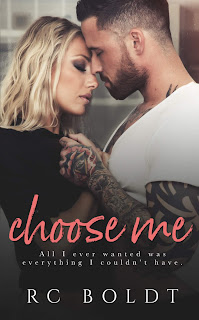 Her voice slurs as if she's already half asleep, and she whispers, “Love you, Hollis.”

The arm I have around her tightens a fraction, and I realize for the first time the words won't come.

The sound of her steady, even breathing is welcome relief, letting me off the hook.Because no way in hell can I say, “But not like.” Not this time.

I'm not sure I'll ever be able to say it again.

If RC Boldt keeps writing books that take a piece of my heart each time I read them, I'm soon going to be left heartless (but then I've been accused of being exactly that a number of times so...). Her latest novel, Choose Me, is a friends-to-lovers romance but it's not your typical take on the well-loved trope, and since this is RC Boldt we're talking about, I wouldn't have expected anything less. This is the story of Magnolia Barton and Hollister Barnes, best friends from the time they became next-door neighbors at eight years old. On the day she is set to become Mrs. Grant Stevenson, Hollis is there, just like he's always been, to show his support as Magnolia takes this new step in her life. But Hollis wishes he had spoken up years ago--that he had confessed to his best friend that she was more to him...that he wanted more. Now, it's too late, because Magnolia had made her choice, and it wasn't Hollis.

This book... Gah! It's heartrending and swoony and everything that I could ever wish to find in a romance novel, and not just the sort involving two best friends whose years of friendship are tested time and again by obstacles. Both Hollis and Magnolia have their respective issues; for as much as Hollis's family has done well enough for itself, Magnolia's always had more, and that difference in wealth was a hurdle in Hollis's eyes, believing he wasn't up to par and couldn't offer what Magnolia deserved. Status was something that Magnolia's parents, particularly her mother, was always conscious of and she never failed to remind Magnolia that she was to toe the line and be exactly what was expected of her. Through everything that burdened them, they were there for each other, then complications come when those insecurities get into their heads. and they listen to it instead of their own hearts.

Can I just say that I love that Grant wasn't shoved into the role of villain? More often than not, the "other" person in one main character's life tends to have something about him that pings as disingenuous and you immediately know that they're going to be tossed to the curb because they deserve it. Inasmuch as Hollis was important to Magnolia, Grant was an honest-to-goodness great guy. I'm not going to go any further than that because like I said, this, RC Boldt took the proverbial road less traveled and crafted this moving romance with a very popular trope. There's something I'm reeeeeaaaaally itching to say, but I'm going to stop myself because I refuse to give too much away, and well, I'm just going to keep my fingers crossed since this author has yet to disappoint my silent wishes and hopes. Suffice it to say that I'm highly recommending you choose Choose Me as your next read. Five-plus stars. ♥