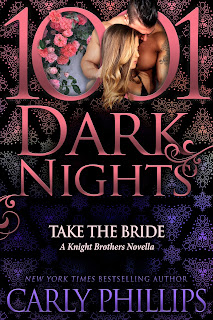 Short but sweet and quite steamy, too! That's basically Carly Phillips's Take the Bride in a nutshell. This novella is part of the Knight Brothers series and it features the lone Knight sister, Sierra, who is set to walk down the aisle and marry Jason Armstrong. When the officiating priest asks if anyone objects to the pending nuptials, lo and behold, someone actually stands up and it's none other than Ryder Hammond, Sierra's first love and ex-boyfriend. Ryder knows he's basically just ruined Sierra's wedding but he went with his gut and listened to his heart telling him that he was about to lose the only girl he's ever loved forever. When he broke her heart years ago, he believed he was doing the right thing; now, all he's got is a couple of days in Pennsylvania's Pocono Mountains to show her that they are meant to be. When time is up, will Ryder have won Sierra's heart or will Sierra have broken Ryder's?

Two books in and the Knight Brothers is turning out to be one of my favorite series from Carly Phillips! I've been looking forward to reading Sierra and Ryder's second-chance love story ever since it was made obvious in the series starter, Take Me Again, that there were still very strong feelings lingering between them. Now, Ryder may have put a stop to the wedding, but that doesn't necessarily mean that Sierra jumped straight into his arms as they rode off into the sunset together, and thank goodness for that! I, for one, have never been a fan of one main character taking away the choices of the other main character and making one life-changing decision for both of them. Self-sacrifice may sound all nice and touching, but yeah, it tends to just lead to heartache and a whole lot of anger and pain. I'm absolutely glad that Sierra was wary of Ryder and that it took more than him glancing her way for her to open her heart to him once again. While Sierra's brothers had minor roles in this novella, I liked seeing their protective side, and I'm looking forward to reading the next two Knight novels. Five stars go to Take the Bride. ♥

Read my reviews for the Knight Brothers series:

Take Me Again (book one) - five stars - My Review

Take the Bride (novella) - five stars - My Review (posted above)

Purchase Take the Bride on Amazon.