Book Spotlight: Out of the Shade by S.A. McAuley 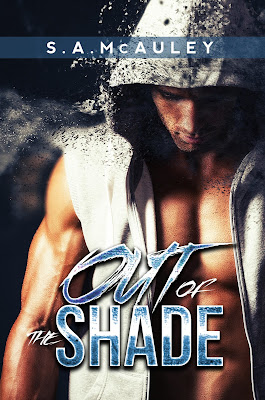 About Out of the Shade
The hardest battle is the fight to be yourself....

Jesse Solomona has always tried to be the perfect straight guy—a cocky sports fan who drinks more than he did in his fraternity days and an expert at one-night-stands. That he hooks up with just as many men as he does women is a secret Jesse’s been hiding for years, fearful of losing his family and tight group of friends. He’s a Kensington boy—a group of guys that grew up in the same neighborhood and somehow all ended up back in their hometown. They, and his family, are the only things that still matter in his otherwise soul-sucking life.

Chuck Dunn, a tattooed and pierced sports photographer, has refused to step back into the closet since he was disowned by his family, but he keeps choosing men who can’t fully be with him. Finally free from a long-term relationship he should’ve ended years ago, he quits his high-profile gig in favor of getting back to the art of sports photography—documenting a local boxing club that works with at-risk teenagers. He may not have the same swagger anymore, but he’s working to be happy with who he is.

When Chuck joins one of the Kensington boys’ community center sports leagues, Jesse’s self-imposed rules are systematically demolished. But there’s one barrier Jesse can’t find the strength to break through—coming out to the other Kensington boys. Chuck knows hooking up with Jesse is a bad idea. Falling for him even worse. But he can’t stay away.

Chuck is damaged by his past. Jesse is frightened about his future. But, together, they may just be able to come out of the shade.

Read my four-starred review of Out of the Shade.

Add Out of the Shade on Goodreads.

An Excerpt from Out of the Shade
Jesse downed the dregs of his coffee and draped an arm over the back of the booth. “How long you gone for?”

“About three weeks, depending on how fast I can work. Give me your phone.”

Jesse lifted an eyebrow but entered the passcode and slid it over to Chuck.

Jesse shrugged. “Can’t offend anyone with that.”

Chuck shook his head and tapped on Jesse’s screen. A split-second later Chuck’s cell pinged. Chuck moved over to his own phone and typed something out, pushing Jesse’s cell back toward him at the same time.

Just as Jesse picked it up, a text popped up in a new thread with a number that wasn’t in his contacts—Kiss my ass, beast

Chuck sat back, waving a hand across the table. “There. You have my digits and I have yours. Call me, maybe?”

That one dimple was in full effect when Chuck smiled this time. “I did. Gay, remember? Now walk me to my truck.”
Chuck swiped the bill before Jesse could and went up to pay instead of waiting for the server.

Jesse hesitated at the side of Chuck’s truck, wondering whether Chuck would try to kiss him, but Chuck just threw a lop-sided grin at him and said, “I’ll see you.” Then he opened his door, settled in, and drove off with one last wave as he pulled out of the parking lot.

Chuck had just given him the same brush-off that he’d given to more girls than he wanted to count.

Fuck it. No better time than the present. Jesse dug in his pocket for his phone. He saved the number from his text thread and hit the button to call. Chuck picked up on the first ring. “Miss me already?”

Jesse could picture Chuck driving, his phone cradled to his ear, that sideways grin plastered to his face. “Three weeks, huh?”

He wanted to say, text me when your flight lands. But how fucking needy was that? Instead he said, “Just making sure you didn’t give me a fake number.”

“I’m not into games, Jesse. I’ll text you when I get into New York. Call me when you have time.”

“Okay,” he replied, surprised at the relief that was evident in his voice.

His cock ached at the thought, but his chest hurt even worse.

It had only taken one night for Chuck to burrow under his skin.

This was not how he’d expected the night to end at all. 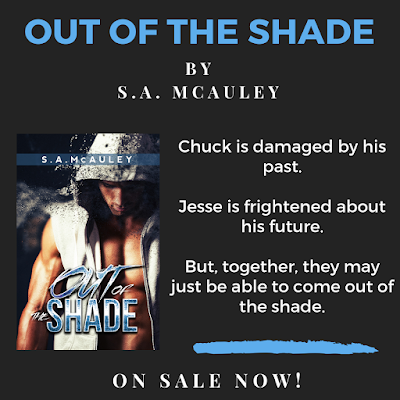 Author S.A. McAuley is a wandering LGBTQ author who sleeps little and reads a lot. Happiest in a foreign country. Twitchy when not mentally in motion. Her name is Sam, not Sammy, definitely not Samantha. She’s a dark/cynical/jaded person, but hides that darkness well behind her obsession(s) with shiny objects.

A Q&A with S.A. McAuley
Q: Can you share with us something about Out of the Shade that isn’t in the blurb?

SA: The problems that Jesse and Chuck face are hinted at in the blurb, but this book deals with several serious/heavy issues like alcoholism, abuse, abandonment, and violence. The depth and breadth of those challenges take them both by surprise and lead to a complete upheaval of their lives.

Q: Are there any secrets from the book (that aren’t in the blurb), you can share with your readers?

SA: Jesse and Chuck are two flawed men who are struggling for something worthwhile in their lives—not just around them either, within themselves too. Their journey isn’t easy, especially for Jesse, but their individual personal strengths underpin the entire book. There’s a lot of darkness in Out of the Shade, but, ultimately, this book is about growth and hope.

Q: What was the inspiration for the story?

SAM: Me coming to terms with my own bisexuality in the world I’d grown up in. In the first rough draft of Out of the Shade, Jesse and I had a lot in common. In subsequent drafts—as he began to show me who he really was—he evolved into his own character. There are still pieces of my own coming out experience woven throughout this book, but it’s divided between so many characters and settings at this point that it’s barely recognizable from my initial draft.

Q: What do you hope your readers take away from this book?

SAM: We each have our own paths to walk and no one else can tell us what the “right” way is to do that. We all evolve, change, and adapt at different speeds and for different reasons. As Jesse says at one point, “We all make mistakes. I’ve made some huge ones I’ve had to make amends for. And not just to other people, but to myself as well.” Sometimes forgiveness of ourselves is the hardest endeavor we can ever take on.

Q: Do you write listening to music? If so, what music inspired or accompanied Out of the Shade?

SAM: Music is vital in my writing process. I can’t write without it. Since I started writing this book almost seven years ago, the songs on my playlist are nearly ancient at this point, but they all hold special meaning or got me through really tough sections of writing. In particular, The Perishers, The Bravery and Switchfoot dominate a good portion of the playlist. I just opened iTunes to look through the list and was immediately transported back to 2012 and putting those first few painful words on the page. The playlist overall begins playful, becoming melancholy, then angry, before morphing into regret, a drive to succeed, and finally happiness and hope. It’s a pretty accurate summation of the book as a whole.