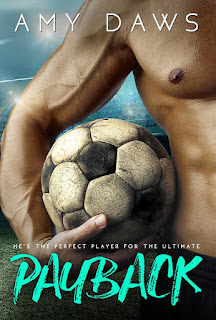 “You're not going to win this battle, Lis. I'm an athlete. We're made of stronger stuff than most.”

I roll my eyes, annoyed that he has me right where he wants me. Jutting out my chin, I press my finger to his chest and say, “Well, I'm a Harris. You don't even want to know what we're made of.”

And just when you thought all hope was lost, Amy Daws returns to the world of the Harrises--football, family, friendship, flirting, and a whole lot of falling in love--with a spin-off that's got a South African professional football player who could give the Harris brothers a run for their money. Whether you're new to Daws's writing or are already one of the countless fangirls and readers out there, Payback is a read you'll want to get your greedy hands on. It's a fabulous introduction for newbies and you'll get why Daws's books are such must-reads. If you already know all about the Harris clan, you'll want to know how a twenty-four-year-old Harris cousin named Alice, aka Allie, thought she had the perfect plan to get payback on her cheating boyfriend and duplicitous stepsister and her cousins' teammate has a starring role in said plan. Fast forward two years later and Allie is back in London and sees her one-night stand again, and this time, he has no intention of letting her go so easily. What twenty-five-year-old Roan DeWalt doesn't know, however, is that his starring "role" has been recorded, and NOT exactly for posterity.

I love how freaking original this story was! I've read a lot of stories where the main characters get together because of a pre-arranged plan to get back at one of their exes by pretending to be together and sowing seeds of jealousy for whatever reason, i.e. reuniting with the ex or merely pointing out that they've moved on. Here, Allie Harris already has her plan in place, and Roan DeWalt is her unwitting accomplice. The whole video story angle was very interesting because it basically flips the usual on its head. Here, it's the guy who's clueless to being videoed while having sex while the girl's the one who's got it all thought out, although in Allie's case, there may have been a thing or two that she hadn't quite though through--like returning to London and falling in love with her one-night stand from a couple years ago. Ah, life and love are complicated, but those complications are what keep things entertaining, at least from a romance reader's point of view. No one likes real-life complications! And with Amy Daws generously peppering her stories with her brand of humor, a guaranteed fantastic time should be had by all.

Roan and Allie were so damn refreshing. These two were all hot and bothered and couldn't care less about pretending otherwise. They were like two puzzle pieces that slotted right into place--opposites who balanced each other out rather perfectly. The banter was sheer genius and I could have happily listened to the back and forth they had going if they were real people...or I could make do and just listen to the audiobook, right? Yes, we do get the Harris siblings, their respective partners, and their sensible father here and they make their presence known with no apologies. They are Harrises after all, meaning they're loving and protective and in everyone's business. This book took me about three or so hours to read, yet it felt like time simply flew by as I got to know Roan and Allie better and promptly fell in love with them just as they were falling in love with each other. Their story can be read as a standalone but do yourselves a favor and read the stories of Allie's cousins! I promise, you won't regret it. Amy Daws has yet to disappoint; it's a good thing I don't bother holding my breath she will! Five-plus stars for Payback. ♥