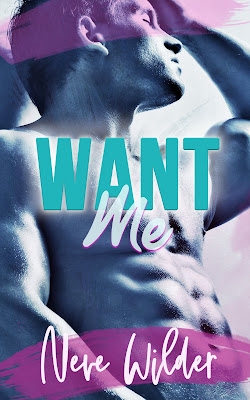 About Want Me
Two roommates. One calculus exam. A whole lot of extracurricular activity.

Nate
Living with four other guys, it’s bound to happen.
Every guy’s been caught taking care of business at least once, right?
It shouldn’t be a big deal.

But I don’t know Eric as well as my other roommates, and things are a little awkward now.
He’s a loner. A mystery. Quietly confident. Smart.
Sexy as hell.

I’ve been happily subsisting on the typical frat guy diet of booze and sorority girls.
But the way Eric looked at me that night?
There was something there.
Something that’s got me curious.
Something that’s stirring up feelings I thought I’d left behind for good.

Something that’s making me think I’m not as straight as I thought I was.

So when he offers to help me study for a midterm I’m convinced I’m going to fail,
I take him up on it.
It’s innocent.
Probably. Maybe.

There’s no way I could’ve known what it’d start...

This is a super steamy standalone new adult/college mm romance with HEA that unfolds across six “episodes” following Nate and Eric. Now bundled up in one collection with a bonus episode for a seamless reading experience. 87,000 words. 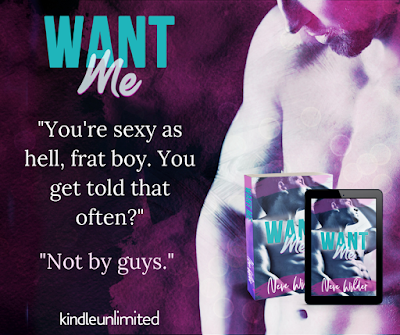 Read my five-plus-starred review of Want Me.

Add Want Me on Goodreads. 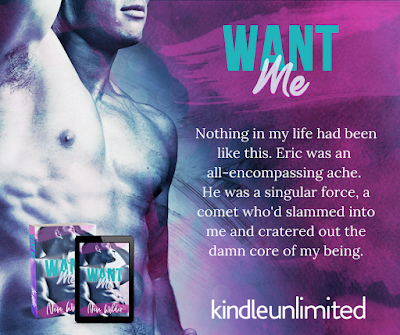 An Excerpt from Want Me
“You all right?”

He wrinkled his nose in sympathy, then laced his fingers behind his head. I turned my focus back to the page I was reading, then realized I’d read the same sentence three times in a row. I could feel him watching me, and when I turned my head to check, I was right. His gaze trickled down from the crown of my head to my lap, slow as a drop of water down the glass of the window behind me. My cock jumped in my pants, and I shifted my legs restlessly. The thing needed a leash.

“You want some stress relief?” he offered.

No. It was on the tip of my tongue to say it, because I was frustrated by the whole situation, but fuck, the way he was sitting there so casually, his legs sprawled, his thickening cock starting to push at his fly… I inhaled deeply through my nose, and as I exhaled, found myself saying, “Like what?”

“Not sure yet,” he mused, posture straightening. He moved to the edge of his seat, scooting his chair in closer so he was right next to me, and even though I kind of knew what was coming, I still flinched when he laid his hand over the top of my thigh.

“Not right here,” I said, lowering my voice. But fuck if I didn’t widen my legs in the same breath, a taboo thrill running through me at being in public. Shit, regardless of Eric, I was starting to think I really did have a thing for being watched—or the threat of getting caught, at least.

Eric palmed my crotch, spreading his fingers over the bulge in my gym shorts. His warmth seeped through the silky mesh fabric and woke my cock right the fuck up.

I glanced around. There was no one to either side of us, and behind me was just a bank of windows that looked over the main quad below. But there were a trio of heads in the carrels across from me. I could hear them when they whispered or turned a page in their books, and I had to muffle a growl when Eric tucked his hand behind the waistband of my shorts, grazing his fingertips over my swollen head.

“No?” It was practically a purr, and it rolled over my skin like warm oil and flooded me with furiously spreading heat that tightened my balls.

He took my silence for the assent it was, and I clamped my lower lip between my teeth as he wedged his hand deeper into my shorts and wrapped it around the base of my cock, giving it a sharp, pulsing squeeze that made me suck in a breath.

“Yeah,” I stuttered out, my dick jumping in his hand as he squeezed again.

“Good deal.” He gave me a few light, feathery strokes that had my hips surging up into the contact, and then his hand tightened like a vice around my shaft, thumb tracing my head in a tantalizing sweep as he leaned in. His whisper washed over me like pure, searing desert heat, the ownership in it shooting straight to my core and making me dizzy. “I want that nut you’re working up right now.”

“Fuck,” I hissed so loud that when I glanced up, I could see the person in the carrel across from me trying to subtly peer over the divider.

I hunched over my desktop to conceal the view of Eric’s hand as it plunged deeper, scooping up my balls and kneading them.

“Not here,” I whispered again and yanked his hand from my pants. Even though by then, shit, I was definitely seeing the appeal in letting him get me off right there. But I knew I wouldn’t be able to stay quiet enough, and though the thrill of possibly getting caught was hot, the reality of a charge for public indecency was not. I needed some ninja skills for that, or a lot more experience, and the whole novelty of getting off with a dude who knew what the hell he was doing was still so keen-edged that I didn’t have a shot.

“Spoilsport. I was enjoying the challenge, but I guess you’re right.” Eric picked up his sucker again, stuffing the wrapper in his back pocket. “You’re a noisy fucker, so maybe a little more buffer is a good idea. Come on.” 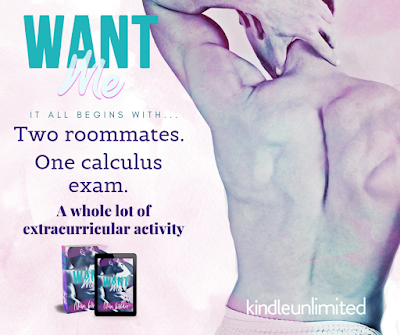