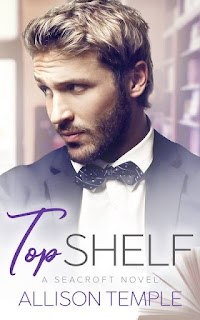 When I read Allison Temple's rather enjoyable debut release, The Pick-Up, last year, it was clear that she had promise. Now that I'm done with my second read from her--and the first novel in her Seacroft series--my instincts about her were proven right. Top Shelf is set in Seacroft, North Carolina and it's about two men who came to the small town at a time in their respective lives when everything seemed to be in limbo. When Martin Lindsey's life as a professor spirals downward, he's older brother, Brian, decides it would be best for Martin to stay with him in Seacroft to find solace and get his bearings while figuring out what to do next in his life. His post-graduate degrees certainly make him over-qualified to work in a used bookstore, but it's better than nothing. He's still jittery in the company of others and he doesn't quite know what to think of the cataloging system in his place of employment. When he wonders if the place is haunted, he realizes that there's someone renting the apartment right above the bookstore. Sebastian Stevenson is definitely no ghost but this artist certainly seems to enjoy pushing Martin's buttons. When Martin and Seb forge an unlikely friendship that could possibly lead to something more, issues with family and an unexpected loss may spell a quick end to an all-too-new relationship that was barely just beginning.

This was a love story that had a slow-burn feel to it. Martin and Seb were strangers who had some really iffy first few meetings that eventually became friends with that thrum of awareness of just how drawn they are to each other always present. I liked that they were as different as they were, that they had these very interesting back stories to them that showed that they were works in progress. I may be more like Martin in many ways--yeah, my eyes bulged in shock when I found out what kind of art Seb did with those used books he got because I'm somewhat of a book hoarder who thinks dog-earing books and creasing spines are a travesty--but I also saw parts of myself in Seb. Both Martin and Seb were odd men out, even though it seemed like it was only Martin who was that way in the beginning. These two found their place in the lives that they chose to lead and also with one another. I adored these two men, but this book also had some highly notable supporting characters, particularly their respective older brothers--Brian Lindsey, with his marital woes, and Oliver Stevenson, with his "golden child" burdens--and seventeen-year-old Cassidy, who seeks guidance from Martin and Seb. All in all, Top Shelf has kicked off the Seacroft series quite strongly, and I can't wait to see where Allison Temple takes her readers next. 4.5 stars. ♥